Dino Gonçalves wanted to quit and come back home before finishing his degree in Architecture, he is now one of the most successful interior designers in Portugal. 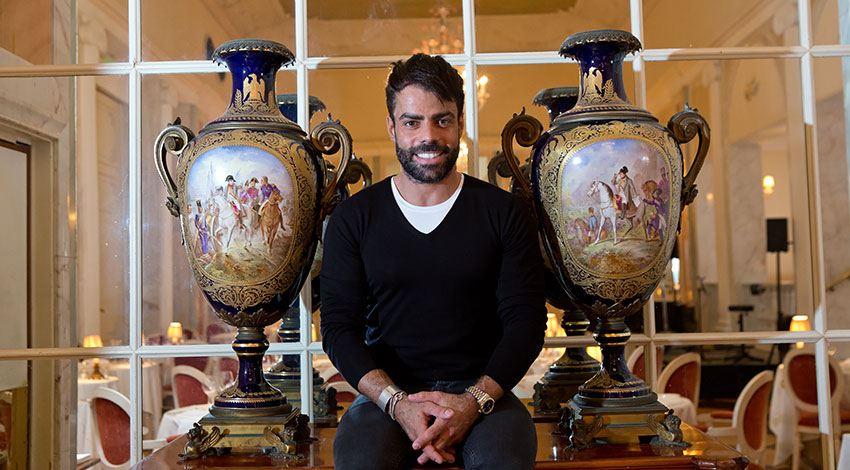 Dino Gonçalves is living proof that people don't necessarily have one single calling in life. He describes himself as "an architect who does interior design", because he is not very fond of the word decorator: In his words, "anyone can be a decorator".

Dino was born into a three-brother family household in March 1977, Funchal. He dreamed of becoming a painter ever since he was a child, far from knowing what the future had in store for him. He finished his studies (known in the UK as Senior School) and followed his father's will by going to University to study Architecture.

He arrived at Lisbon as an 18 year old, terribly homesick young man with a passion for learning. According to the interview he gave Madeira Essential, he found the adaptation process to the capital an "awful" experience. During his first year there, he came home 18(!) times, struggling with his parents to let him stay: "I wanted to quit University but my parents wouldn't let me, so everytime I'd come to Madeira, they'd send me back to Lisbon".

He finished his first year at University with "great" grades after having decided to give Lisbon a chance: "I thought to myself, I'm going to give it a try here for my first year, and if that doesn't work I'm definitely going back to Madeira".

During his University time, he helped with party and shop window decorations and was an extra in tv soaps, all to get some "pocket money" to help improve his quality of life in Lisbon.

5 years later, Dino Gonçalves left Lusíada University, Lisbon, as a young architect with no intentions to return to his hometown. He was certain of two things: he wanted to stay in Lisbon and he wanted to make interior design his priority, rather than architecture.

An internship in an architecture office followed, and funny enough, this was an office "with many works ordered for Madeira Island at the time". He kept many good memories from his time as an intern, but on his last day he promised himself to "never work for anyone else again".

He began working on his own, with a little help from his business cards and his computer. He made new connections and friendships and eventually managed to create a solid network, all this while investing in further education: After several post-graduation studies, Dino Gonçalves was ready to leap forward.

Dino decided to dedicate himself to interior design seriously in 2003, all thanks to Casa Decor, a program where "people were chosen by a team and they would choose the top decorators at that time. In 2003 I went there and offered to do the decorations. I wasn't accepted but I'm so boring and persistent that I kept going there pretty much every week for two months saying that I really wanted to do it". And his efforts paid off: "One of the decorators assigned to work on a space fell and broke his leg the day before, which was very short notice for anyone else to take the space." Dino finally got his invitation and took "the biggest space in the house".

"I thought to myself: now I'm really going to start showing my work to everyone". His first public work was in "a giant space, in a Casa Decor (Decor House), in an old palace located in Santa Catarina". Dino felt the weight of responsability on his shoulders, but instead of giving in, he used the opening day to do the unthinkable, "quite a cheeky statement": "I thought, if I want the press to know that there's someone new around here doing new things, I better do something new". And what did he do? He filled the house with "10 persian greyhounds that were running around the house and among the people".

The positive feedback allowed him to return for the next two years, time when the program was extinct, always surprising everyone with his choice of elements.

And he kept working consistently ever since. Right now he can be found doing restoration work in a hotel in Luanda, as well as a house in Monte Estoril (Mount Estoril). He is also in charge of Cadaval Palace's decoration, in Évora, where he will reproduce the Christmas ambiance of the old days. He is also in charge of the Reid's Hotel flower decorations for New Year's Eve dinner.

Dino has several memorable episodes to share, but there's one in particular he's fond of, the day he was invited to "an international event". He was invited to a party in Monaco in 2011: "I remember going to this particular party and sitting at the table in a fabulous place" while thinking that "the decorations were absolutely disgusting". He spoke to one of the Princesses of Monaco and said "this is all very pretty but the table decorations are awful, so next year I will come here and do better". In 2012 he was invited to design the same ball's decorations and succeeded.

Dino describes himself as "organised" and "cheeky" and gets most of his inspiration from Spanish and Brazilian decorators: the Spanish for their "feistiness" and the Brazilian for "their over-the-top creations".

Dino has done a bit of everything as far as interior design is concerned and works with whatever pleases him the most. According to him there are no big dreams in need of fulfillment but "working in Italy by the Como Lake in Capri, some place fun like that" would be very much appreciated, as well as "more works in Madeira", he finishes, with a smile on his face