Tea at the Reid’s is a ritual that’s over 120 years old. It has become the hotel’s trademark and a Madeira reference. 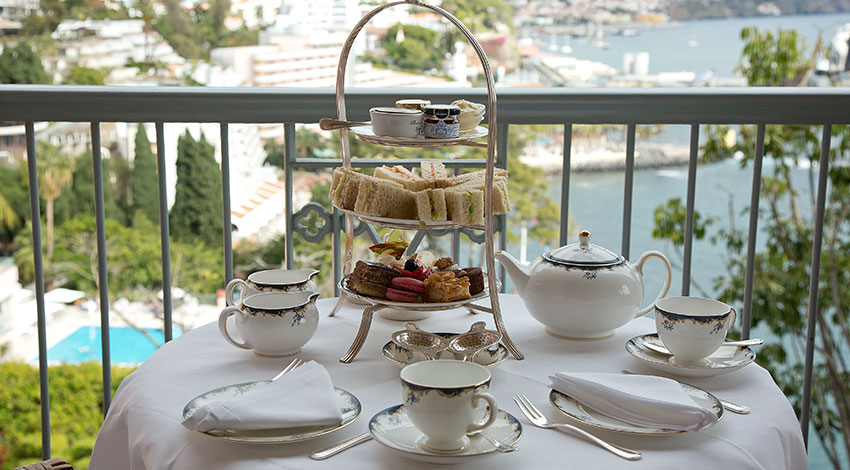 Honoré de Balzac once wrote that “Great love affairs start with Champagne and end with tisane.” Had the French writer written “tea” instead, this quote could very well have been written on Belmond Reid’s Palace’s terrace.

Tea is one of the things that makes Reid’s. It’s one of the hotel’s insignia and a real experience. Many iconic personalities from the 19th and 20th Century have had tea at Reid’s, some on the balcony with a view to the bay, some on the Tea Terrace. One of those people would be Margaret Thatcher, former British Prime Minister, who was here on holiday celebrating her 50th wedding anniversary. At the time, she received an invitation from the hotel management to have some tea.

Ever since being established in 1891, quite a few notorious characters have passed through through Reid’s, such as Austrian Empress “Sissi”, the British former Prime Minister Winston Churchill or the poet and actor George Bernard Shaw, the first person ever to win a Nobel prize and an Oscar.

Tea thus became a service provided to meet the belle époque’s travellers’ high standards, and ultimately, a part of the hotel itself: at the time, travelling was becoming a bit of a habit in Europe and since most of the hotel’s customers were British, tea o’clock would be an absolute “must have”, says Ciriaco Campus, Belmond Reid’s Palace General Manager.

Tea could be had either exactly at 5 pm or during the afternoon until that time. This was a highly important social daily event, as one can tell from the hotel’s own vast collection of portraits. This ritual was so socially engraved that it would be turned into a dancing tea at times.

Nowadays, tea is still being served right on time and guests are welcomed with a glass of champagne: bubbles are always a symbol of celebration and what better reason would there be to make them part of the ritual? This is a way to “honour tradition”, says Ciriaco Campus.

In order to celebrate the hotel’s 120th anniversary, Reid’s tea ritual has been immortalized by Andreas Augustin’s book “I had tea at Reid’s”. According to the Austrian journalist, coming to Madeira and not having tea at Reid’s would be the same as travelling to Wien and not trying Sacher Torte, or visiting the Great Pyramid and not staying at Mena Hotel House.

There is still a dress code to honour the tradition. Isabel de Portugal explained that this ritual is the highlight of many people who visit Madeira, whether they’re staying at Reid’s or not.

The melody coming from the piano makes it easier for one to choose between black tea and Azores’ own Gorreana, the most popular choices according to Maître Romeu Miranda. Once the choice is made you can count on a variety of sandwiches such as prawn, avocado or cream cheese and salmon as well as some mouth-watering local confectionery. An impressive array of jams is also served with fresh from the oven scones: Phisalis with passion fruit, prickly pear, strawberry and American grape jam jams are available to warm any heart. In addition, tea cakes are served.

Tea became popular for its rumoured regenerative properties and started being sold in a few European locations during the 17th Century, namely in the Netherlands and in England. There was no ritual associated with the drink at that point, and the one to blame would be Catarina de Bragança, following her arrival at English soil. She created the ritual around tea in all its mystique.

Tea has arrived at Europe by the hand of the Portuguese, who, in 1557 began transporting it to Europe (using the port of Macau). We were far from imagining the importance this beverage would have nowadays.

Tea began being sold in a few European locations during the 17th Century, namely in the Netherlands and in England, due to the rumour that these had regenerative properties. There was no ritual associated with the drink at that point, and the one to blame would be Catarina de Bragança, following her arrival at English soil. She created the ritual around tea in all its mystique.

The beverage was thus introduced into the British courtship and became a State Affair overnight, since Catarina de Bragança ordered that it should be consumed every day at precisely 5pm.
The British sea expansion took its culture and habits all across the globe and Madeira was no exception.

The Portuguese island, being a crossing point in the middle of the ocean to the rest of the world, would soak in a bit of all the passing cultures and diversities. When the British occupied it in 1801 and 1807, their rituals and traditions became engraved in the Region, tea included.

Having tea at Reid’s is being a part of a century old tradition that repeats itself day after day, on its way to immortality. It is to be seated in chairs filled with stories with a view to Funchal and the Atlantic Ocean, feeling like part of History!