Made for the gentleman but adopted by the ladies, the Royal Oak from Audemars Piguet is an immediately recognisable timepiece in any circumstance. After celebrating the 40th anniversary of the women’s watch, the jewellery designer Carolina Bucci accepted the challenge of making it even more surprising. 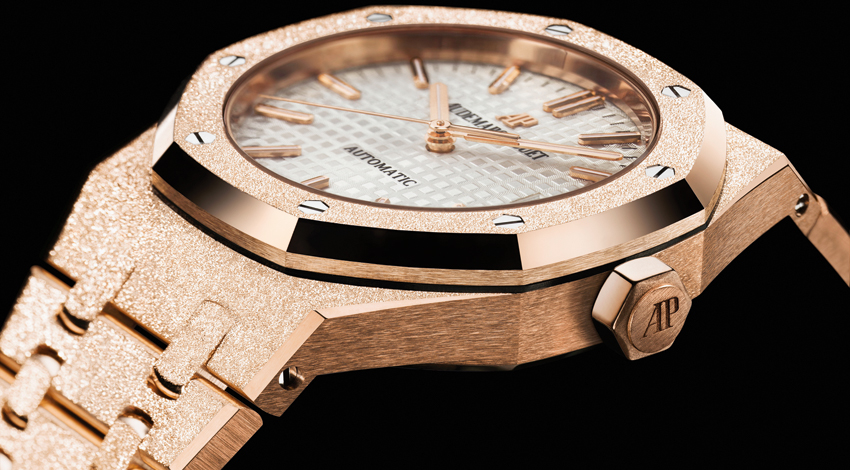 The Royal Oak model from Audemars Piguet, with its octagonal case with hexagonal screws around the bezel and the unique criss-cross pattern (gran tapisserie), holds its own innovative place in the aes thetics of watchmaking. The model was created in 1972 by the famous watchmaker Gérald Genta for Audemars Piguet. It was a sports watch with a robust appearance, prepared to face the inhospitable outdoor world.

Despite its markedly male aesthetic, in 1976, the Le Brassus manufacturer decided to adapt it to the female wrist. Having just arrived at the brand (1975), Jacqueline Dimier, at the time one of the few women designers in an essentially male world, was in charge of the challenge. Opting to modify the original as little as possible, Jacqueline achieved the desired femininity by simply reducing the measurements, giving it a lighter look while keeping the proportions and the strong character of the original.

The result was a success and contributed towards making this model one of the brand’s most iconic and a watchmaking reference for both genders. To mark the 40th anniversary of the birth of the women’s Royal Oak, Audemars Piguet invited the Florentine jewellery designer Carolina Bucci to reinterpret the model with the originality that sets her work apart. Carolina, who curiously was born in the same year that Jacqueline created the Royal Oak for women, designs jewellery for the brand under her own name.

Her main signature is the Florentine finish, an ancient technique that hails from the Tuscan capital and which consists of hammering the gold with a diamondtipped tool, endowing the surface with a beautiful sparkling effect. The collaboration, a continuation of Audemars Piguet’s long tradition of combining the two arts, watchmaking and jewellery, presented a demanding challenge for the craftsmen involved in the process of applying the technique to the case and bracelet of the Royal Oak.

The task was relatively complicated considering the geometry of the watch, the pronounced edges and, above all, the timeless status that defines this model, one of the most prominent on the market whose quality could never be compromised.

The end result, the Royal Oak Frosted Gold, meets all the criteria set out by Carolina Bucci, which consisted of creating a piece that was distinct enough to draw attention from a distance and, without perverting the original codes, injecting an additional layer of femininity into this watch.

According to Audemars Piguet, the timepiece aims to pay tribute to the creation of Jacqueline Dimier and to the work she did as a designer over the years, reflected in many models, for both men
and women, as well as the independent spirit to which the house has been faithful over almost a century and a half of existence.

Presented at the end of 2016, the Royal Oak was the centre of attention at the latest SIHH (Salon International de la Haute Horlogerie) in Geneva. The model is available in two types of 18kt gold – white and rose – in the case and bracelet, and in two sized cases – 33mm and 37mm.

The dial features the typical gran tapisserie motif, with hour, minute, centre seconds and date protected by glare-proofed sapphire crystal. In the 33mm model, the functional side is ensured by the quartz caliber 2713, while the Royal Oak Frosted 37mm holds the self-winding caliber 3120, with a guaranteed minimum reserve of 60 hours.

Conceived to make the difference but faithful to its DNA, the Royal Oak Frosted is immediately recognisable but still, indisputably, because of its ownshine, sure to surprise.