Built as a mountain shelter for the rising numbers of tourists in the early 20th century, this building is now a place to experience memory and tradition. 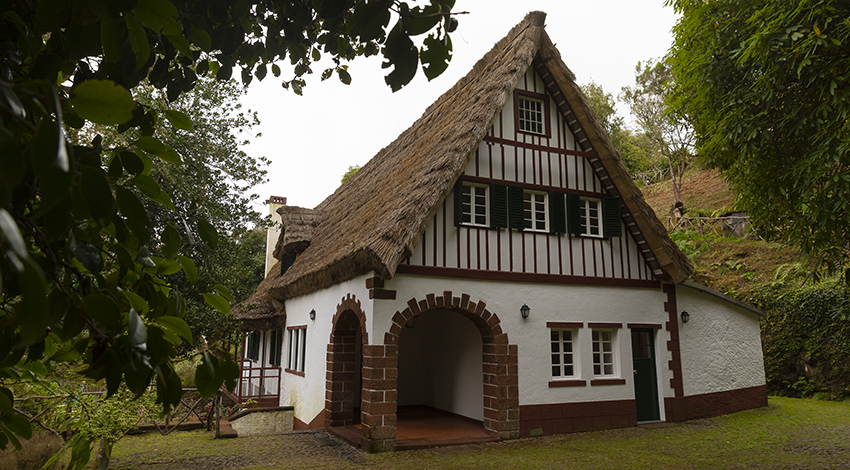 At first sight it is just like a house out of a story by the Grimm brothers. Covered in straw and surrounded by the forest’s lush green. It looks cosy and could very well be the setting of a fairy tale.

Stepping through the door one finds the table is set, as though guests are expected, returning from a walk through the immense natural landscape all around. English dishware, 19th century, and a 20th century Madeiran linen tablecloth. From thereon out the remainder of the house is distributed through two floors, with divisions ending in a tight corridor, with an intense aroma of wood and the light of day finding its way through the little windows.

The furniture is from the 1940s, almost entirely made from persea indica from the island. Replicas of the original furniture were made. The floor timber also came out of the Madeiran forest, something which would be impossible nowadays owing to the laws that protect Nature. The atmosphere is inviting, a family home, where there would surely be children or the warmth of a fire.

The entire space is a journey, a recreation of the environment one would find in a mountain shelter from the 19th and 20th centuries, the period when the first tourists ventured the dense forest of Madeira.

The transformation of Casa das Queimadas in a museum space is a project of the Forests and Nature Conservation Institute. The intention was to retain the style of the décor and the building itself, which served as model for popular Madeiran architecture. The renovation sought to retain the site’s spirit and contribute to the preservation of heritage.

Visiting the several rooms once can enjoy original pictures of Madeira in the 19th century and pieces from artists like Andrew Picken, 1840, and J. Eckersberg and Pitt Springett, 1843. There are also many objects re-enacting the traditions of Madeira, like the kitchen and table utensils.

Built in the first quarter of the 20th century, the building displays an architecture inspired in the typical houses of Santana, covered in thatch, which have been a landmark in Madeira since the settlement in the 20th century. The building was constructed together with a set of mountain shelters constructed in Madeira starting in the second half of the 19th century. The levada of Caldeirão Verde, constructed between 1877 and 1904, passes through Queimadas. Still today it is one of the most sought trails in Madeira, together with that of Caldeirão do Inferno and the access to Pico das Pedras; all passing through the Forest Park of Queimadas.

The original setting and decoration of the house took until the 1940s. Around mid-century, the house appears depicted in a painting by Max Römer, a German painter established in Madeira. The final construction works were registered with the Junta Geral do Distrito Autónomo do Funchal, Madeira’s executive authority back then between 1949 and 1950. Materials for the construction were collected in the following years, when improvements to ensure greater comfort were also made. The house started to serve its function of supporting those who ventured the sinuous road that leads to this piece of paradise.

In her 1956 work O Arquipélago da Madeira, Portuguese writer Maria Lamas wrote: ‘He who departs from Santana will find the flowery oasis of Queimadas, with its thatch house, covered in precious timber from the region on the inside – persea indica and tilde – and the fire, comforting for those who arrive stabbed by the cutting airs and humidity that impregnates that place’.

This quote features in a leaflet given to visitors, explaining the origin, importance and adaptation works underwent by the house. People aged 12 and over pay two euros to visit.

Opening Casa das Queimadas to the public was part of a wider project of requalification of the forest park. This renovation concerned leisure as much as it did environmental protection since it involved the renovation of lagoons that serve as water reservoirs to support firefighters.

Renovation works included a parking space with 50 spots, betters access and signposting and several support equipment. A welcome centre for the Forest and Nature Conservation Institute was also set up with information on the protected areas of Madeira.

Next to the main house is the smaller house, also in thatch, now converted into a cafeteria. Here one can enjoy some traditional products from Madeira and appreciate the taste of Madeiran poncha in the cold mountain atmosphere, where many ensure it tastes better.

The Queimadas Forest Park is considered one of the most beautiful places of Madeira. It was created in the early 20th century, in an area dominated by the Laurel forest, a Natural World Heritage Site.

Here one can enjoy several species from the forest, like tilde, picconia, hundred year-old heather, Laurustinus, Madeira blueberry and cedar along with several species which were introduced and adapted to the space.

At Queimadas one can also enjoy watching indigenous birds like the chaffinch, the masked water tyrant or the common buzzard as well as endemic species like the common firecrest or the trocaz pidgeon.