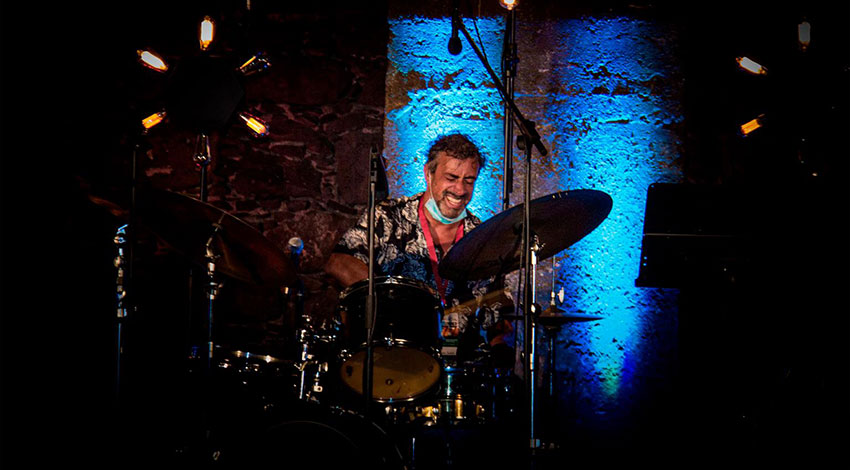 Funchal Summer Jazz, a sequence of eight jazz concerts, promoted by the Funchal Town Hall, will be bringing some of the best Portuguese jazz acts to the Santa Catarina Park and Cais do Carvão.

The concerts will be taking place at 9:30 PM, local time, and the opening event of this cycle featured the Caio Oliveira Quarteto, on July 2nd, which, alongside the namesake of the band on the drums, is comprised of saxophonist Francisco Andrade, guitarist Décio Abreu, and bassist Filipe Gouveia. The concert took place at Cais do Carvão, before a full house.

This coming Friday, July 9, the Santa Catarina Park will be hosting a quartet that won the 2019 RTP Best Young Musicians award, led by saxophonist Tomás Marques, with Samuel Gapp on the piano, Nelson Cascais on the contrabass, and drummer Diogo Alexandre.

On the 24th of July, back at Cais do Carvão, the cycle will be presenting the band Quinteto de Filipe Vieira de Freitas, composed of Alexandre Andrade on the trumpet, Francisco Andrade on the saxophone, Ricardo Dias on the contrabass and Luís Caldeira on the drums. The band is fronted by Filipe Vieira de Freitas, after whom it is named, a guitarist who has found success as a songwriter and who will be performing mostly original works in this concert.

The remainder of the concerts of this festival will take place at the Santa Catarina Park, where, on the 31st of July, Sofia Almeida, the youngest jazz performer of the Madeiran Jazz scene, will be featured, a singer who has earned a professional degree in Jazz Instrumentalism at CEPAM and has just been accepted at three of the most prestigious jazz teaching institutions in the world, the Berklee College of Music, in Boston, the New York University, and the Conservatorium van Amsterdam. The Sofia Almeida Quartet consists of pianist João Freches, bassist Filipe Gouveia and drummer Paulo Gouveia.

The Funchal Summer Jazz concerts will then resume on the 28th of August, after a nigh month break, with the Nuno Ferreira Trio (led by guitarist Nuno Ferreira, bassist António Quintino, and drummer Luís Candeias) and saxophonist João Mortágua, an already well-established star and one of the greatest improvisers in the Portuguese national jazz scene.

On the 10th of September, one of the greatest jazz trailblazers in Madeira, Jorge Borges, will take the stage with Alexandre and Francisco Andrade, Ricardo Dias, and Jorge Maggiore, who form a much-acclaimed quintet. On the following day, anchored by the infallible drummer João Pereira, two golden performers of Portuguese Jazz, accordionist João Barradas and saxophonist Ricardo Toscano, will get on stage for a unique concert, from which only the unexpected can be expected.

Last but not least, the closing event of Funchal Summer Jazz will happen on Sunday, September 19, featuring one of the most revered bands in Portuguese jazz, the trio comprised of pianist Mário Laginha, who leads the group, bassist Bernardo Moreira, and drummer Alexandre Frazão.

All of Funchal Summer Jazz’s concerts will be free to attend but limited to the capacity of each venue, subject to restrictions imposed by protective measures against the transmission of COVID-19.

A ticket pre-booking will be required to attend each concert, at least 48 hours before the concert. It is also required of concertgoers that a negative COVID PCR test result is presented by e-mail, at the time of the booking.