There is another side to Madeira, away from cars, roads and cities, full of beautiful trails that can only be reached by foot. 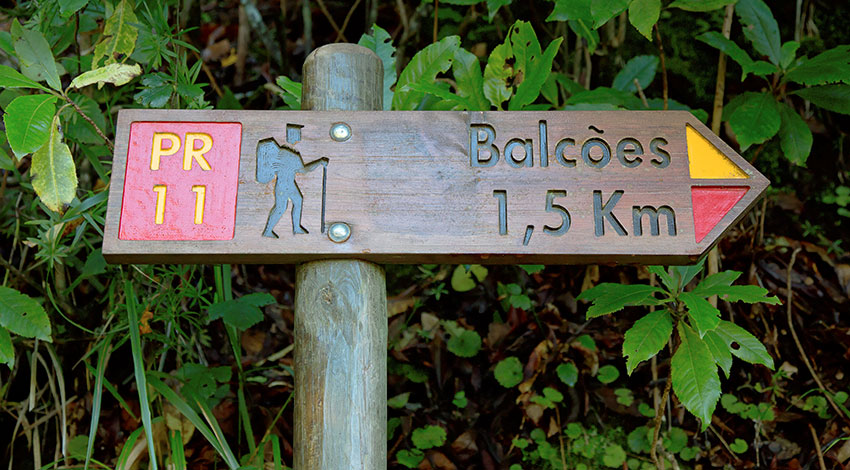 Levadas are one of Madeira’s most ancient human heritage: These trails carved into the rocks started being built in the 15th Century at the first stages of the island’s human settlement and were meant to carry water from abundant areas to where there were less quantities of it. This water was always meant for irrigation plots and public consumption.

One of Madeira’s best features is that water can be found anywhere. The dense vegetation has an exceptional quality to retain rainfall and the water that is collected is considered to be one of the islands’ most valuable resources.

These complex mounts and valleys that can only be reached by foot have not started to be exploited as a touristic atraction until very recently, even though crossing these old trails over escarpments and with magnificent sights on the background is probably the oldest form of active tourism in Madeira, as old as the island’s tourism activity: two centuries.

These levadas take you to explore the Laurissilva florest which is considered UNESCO World Heritage. A vast range of trees lost in the landscape, such as Laurel, Til, Vinhático, Barbusano, Beech, Lilly of the Valley Tree and Pau Branco showcase a little bit of the island’s endemic flora.. In places like Ribeiro Frio, where many of the trails begin, it’s easy for one to feel part of an enchanted forest-like fairytale, where a leprechaun or a fairy can pop out at any time. 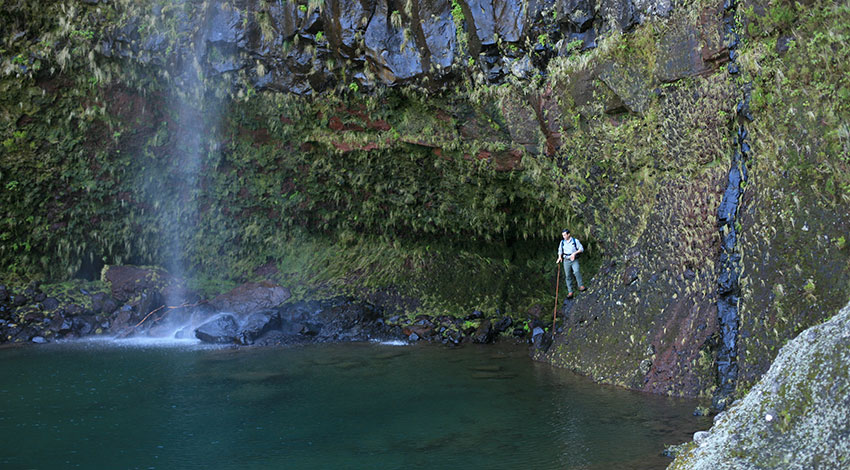 Born an raised in Madeira, the tales of the pedestrian paths that cross the island were a part of my childhood, up until the point where I started discovering some of these trails and seeing them with my own eyes. I remember my first trail experience, Ponta of São Lourenço with its path underlining the fascinating Baía D’Abra and a soothing dive at Cais do Sardinha as the ultimate finishing reward. I did not fall for the charm behind these paths right away but as soon as I started I understod why so many people would come to Madeira specifically to experience these thrills and adventures.

Due to the increasing demand for this type of activity, the necessity to maintain these Levadas grew bigger, especially when some of them are no longer used to carry water. This maintenance ultimately lead to the creation of recommended routes. There are 30 in total, 28 in Madeira and 2 in Porto Santo.

There are many more trails, but they are not always properly identified, signalized or maintained. The upside to the oficial ones’ is that they are properly and officially signalized, while displaying distances, durations and dificulties and highlighting the main stops.

There are 197,2 km worth of recommended trails in total, each one with its own distinctive features. And despite the fact that they are commonly known as levadas, not all of them are actually Irrigation canals but paths and trails used in pasturalism, as well as conections to several more secluded points on the mountains that contained several resources, such as wood and many others. 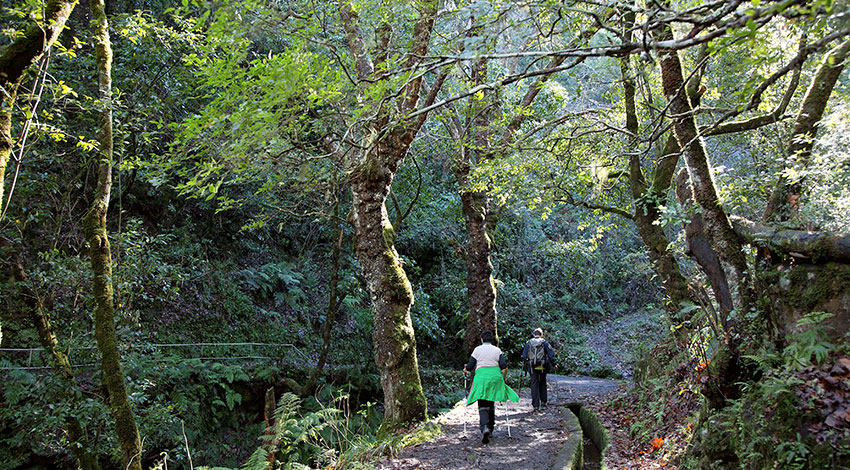 They all possess some assets in common, such as one of the most stuning views in Madeira, as well as luxorious forests and waterfalls, small ponds and canyons, and a beautiful atmosphere. The actual construction of these paths is beautifully executed and gives you a home feel, rather than something manually done.

The diference is usually the scenery, the dificulty and the distance. Regarding distance, the shortest oficial trail is Caminho Real do Paul do Mar, spaning across 1,8 km and averaging 1 hour and 20 minutes. The longest is called Caminho do Pináculo e Folhadal, with a lenght of 15,5 km, taking aproximately 6 hours and 30 minutes to complete. 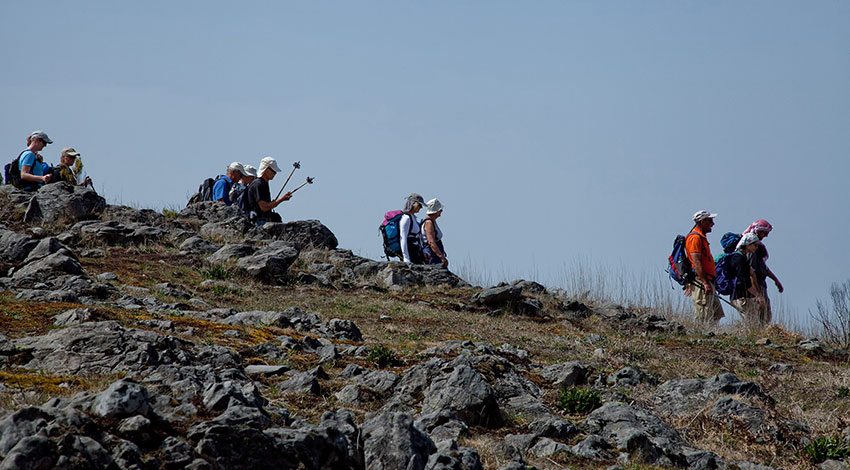 Some of the longest trails include Levada do Furado, being 11km long and Levada do Caldeirão Verde, which is 13 km both ways. In some cases it’s not possible to start in one place and finish in another, considering that the end of the trail has no exit. You must then returned to the point of departure.

These paths are a very sought after atraction, being visited by hundreds of people on a daily basis. Some choose to take a map, a guide or even a mobile phone app and take on the challenge alone or in small groups. Others take advantage of many of the available companies that provide transportation and specialy trained guides to lead them. 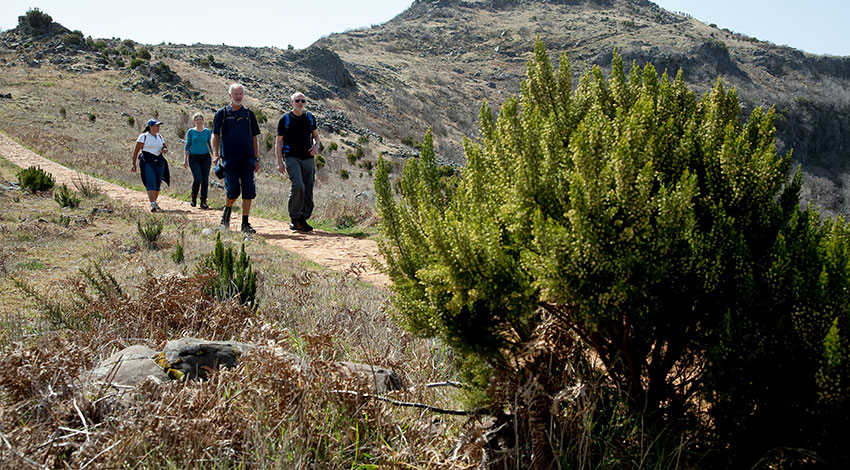 Most of the services these companies offer are based around the oficial routes. Some of the most sought after are Levada do Caldeirão Verde, Levada do Rabaçal, 25 Fontes, Levada do Rei, Ponta de São Lourenço and Vereda do Areeiro, that connects the highest mountain peeks in Madeira.

Pico do Areeiro is a challenging trail with just 7km, but a very dificult terrain and many steep steps. The starting point is at an altitude of1818 meters at Pico do Areeiro, then decending to 1542 meters, to then force you into climbing to an altitude of 1861 meters in Pico Ruivo, the islands’ highest point.

Despite the intense climb, one of the most rewarding aspects is a full view of the island, from it’s highest peek. Being there, in Pico Ruivo, you almost feel like the sky is within your grasp. And when the clouds are low, you literaly walk above the clouds.