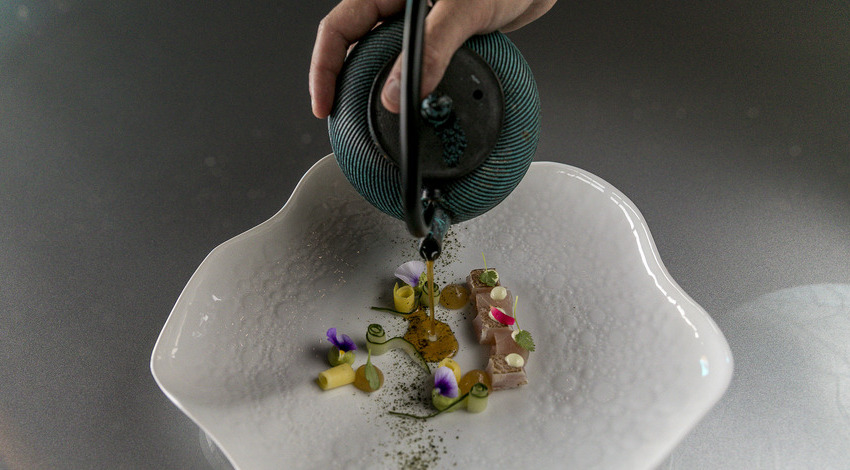 Those who say Michelin is all about the stars are sorely mistaken as there are other ratings in the restaurant reference guide.

Whenever the Michelin Guide comes up in conversation, the first thing we think about is the stars – the much-coveted acknowledgment conferred after undercover inspectors visit restaurants to assess the quality of their food.

Edited in over 30 countries, for many, it is the World's premier gastronomic guide. It also pioneered a criteria-based rating system that hands out one star (a very good restaurant), two stars (excellent cooking that is worth a detour) and three stars (unique cuisine that is worth a special journey).

Portugal and Spain both feature on the same guide. The 2021 edition awarded stars to 252 Spanish restaurants and 28 Portuguese restaurants. The latter include Madeira's Il Gallo D'Oro and William.

Benoît Sinthon heads the cuisine at Il Gallo D'Oro – at the PortoBay group's The Cliff Bay – and he won Madeira's first star ever. Despite his many other awards, he still believes that 'the Michelin Guide will always be the most prestigious guide'. Still, this French chef who embraced Madeira as his heart's home remains keen on 'renewing these awards which are a cause of great pride. New awards are also welcomed.

The interruption imposed by the Covid-19 pandemic allowed for renovation works in the restaurant which now features the Chef's Table where 'customers will be able to accompany and see our team cooking and plating', he explains.

The Michelin inspectors' most used phrase when describing the Il Gallo D'Oro could hardly be more accurate: 'there is nothing like eating at this house in order to highlight, with real criteria, that… we already know where Eden is'. And then there are the compliments to the chef's cuisine, 'fresh, flavourful and creative which exalts Atlantic flavours'.

A mere few metres separate the two star-bearing restaurants in Madeira. William, at the Belmond Reid's Palace, where the kitchen is led by Chef Luís Pestana, also renewed its award and the goals remain high: 'After the star, there is always another star'. But after the pandemic, 'it is necessary to bolster our presence, show that the quality and consistency of our service has not faltered, has not changed and continuous to be our priority'.

William has been running on reduced hours and retains a strong connection to Madeira's products, which is not always easy in a Michelin restaurant. 'But it is exactly here that the challenge is met. Some local products are extremely rich, exotic for some and extravagant for others', explains that Luís Pestana.

The guide highlights 'a cuisine with a classic basis with very successful combinations, a logical exaltation of the local product and an exhaustive attention to every detail'. The view of the bay of Funchal is also highlighted.

Madeira's two Michelin chefs would like for the constellation to grow larger. More stars 'would be great', admits Benoît Sinthon. Luís Pestana agrees and adds that 'a larger number of restaurants on the Michelin Guide would make Madeira be better known as an excellent gastronomic reference'. This acknowledgment would bring over more visitors, which would be 'excellent for the destination'.

But there is more than just stars to the Michelin Guide. It includes other categories like Bib Gourmand, which stands for a great relation between quality and price. Madeira's debut in this category is the Avista. The restaurant is Mediterranean on one floor and Asian in another, and the guide highlights the 'philosophy of informality in which the idea of sharing plates to enable guests to try more dishes is key'.

Benoît Sinthon is the executive chef at Les Suites (which is part of The Cliff Bay), where the Avista is located, but it is João Luz and Luísa Castro who are in charge of leading the cuisines, Mediterranean and Asian, respectively.

João Luz believes that the Bib Gourmand is 'a high acknowledgment of the work developed over the past year and a half'. The impact is 'very positive for the teams and for our customers, it highlights credibility and prestige'. Beyond that, the award also highlights 'a clear organisation between the Head Chef and the Sous Chef and further teams for a perfect harmony'.

Luísa Castro highlights that the Bib Gourmand is 'of extreme importance for all the professionals who love their profession, because it takes into account the quality of the products, matters of flavour and technique, and the personality of the chef in his cuisine!'.

Both agree the award means more responsibility and Luísa Castro recalls that 'gastronomy is one of the most beautiful ways of creating memories of good times'.

Casal da Penha is not very far away. Here the Bib Gourmand is already well-known. The first reference was in 2018. Maikel Azevedo is the restaurant's face and is in charge of service. The father, João Dinis, is the head chef and owner and is in charge of a cuisine that bets on fresh products and a strong element of tradition.

This family restaurant, has been open for almost three decades and operates in the space of an almost one-hundred-year-old teahouse. According to the Michelin guide, the restaurant offers 'dishes with a traditional flavour including lots of regional specialties, delicious fish of the day options, an extensive choice of meats, and tasty rice dishes, including a variety of paellas'.

In the town of Câmara de Lobos, the Bib Gourmand also highlights the Vila do Peixe. The secret is in the restaurant's name (meaning 'fish town'). 'If you're looking for authentic maritime-inspired cooking and fresh fish caught the same day you won't find a better option, as guests can choose the piece of fish they want to eat as if they were in the market', states the Michelin Guide.

Other restaurants also bear the 'Michelin Plate' distinction, a category created in 2017 and which stands for 'a quality cuisine', and acknowledges the work and services on offer. In Madeira, three bear this title.

Chef Roberto Barros has served as head of cuisine at Armazém do Sal for 12 years and he acknowledges the impact that being recommended on the guide can have. 'Inspectors come here and make their choices'. Armazém do Sal offers a Mediterranean cuisine that bets on 'fresh products', he explains. And he privileges fish, which is Always fresh and changes according to the season. Roberto Barros sees being referenced as an award 'for the persistence and hard work invested into a labour of love'. The guide highlights the 'modern interpretation of traditional cuisine'.

Also referenced in this category is the Belmond Reid's Palace's Vila Cipriani. And the award is not a new one. Highlights include 'elegance' and the 'Italian cuisine', as well as the superb views of the cliffs' from the terrace. Not to mention the professional team working under Marcelino Fernandes and which is 'very much old school!'.

Chef Carlos Magno of The Dining Room, at the Quinta da Casa Branca hotel does not hesitate to consider the Michelin Plate a 'relevant' rating and 'an added benefit for the quality of the product and service'. Inspectors mention the 'splendid garden', the 'elegant dining room' and its English feel and highlight the 'traditional cuisine showcasing contemporary detail in addition to a choice of international dishes'.

Some customers ask 'if we would prefer a star', admits Carlos Magno. 'There are customers who think we should already have been given a star', he mentions, aware that 'the path ahead is still long'. Work is already underway. 'If we win, very well!'. For the chef, 'the acknowledgment of a Michelin star Always brings more customers'.