Solaria, little shores, natural pools, beaches of pebble stones, black sand or basalt… the beaches of Madeira do not lack in variety of beauty. 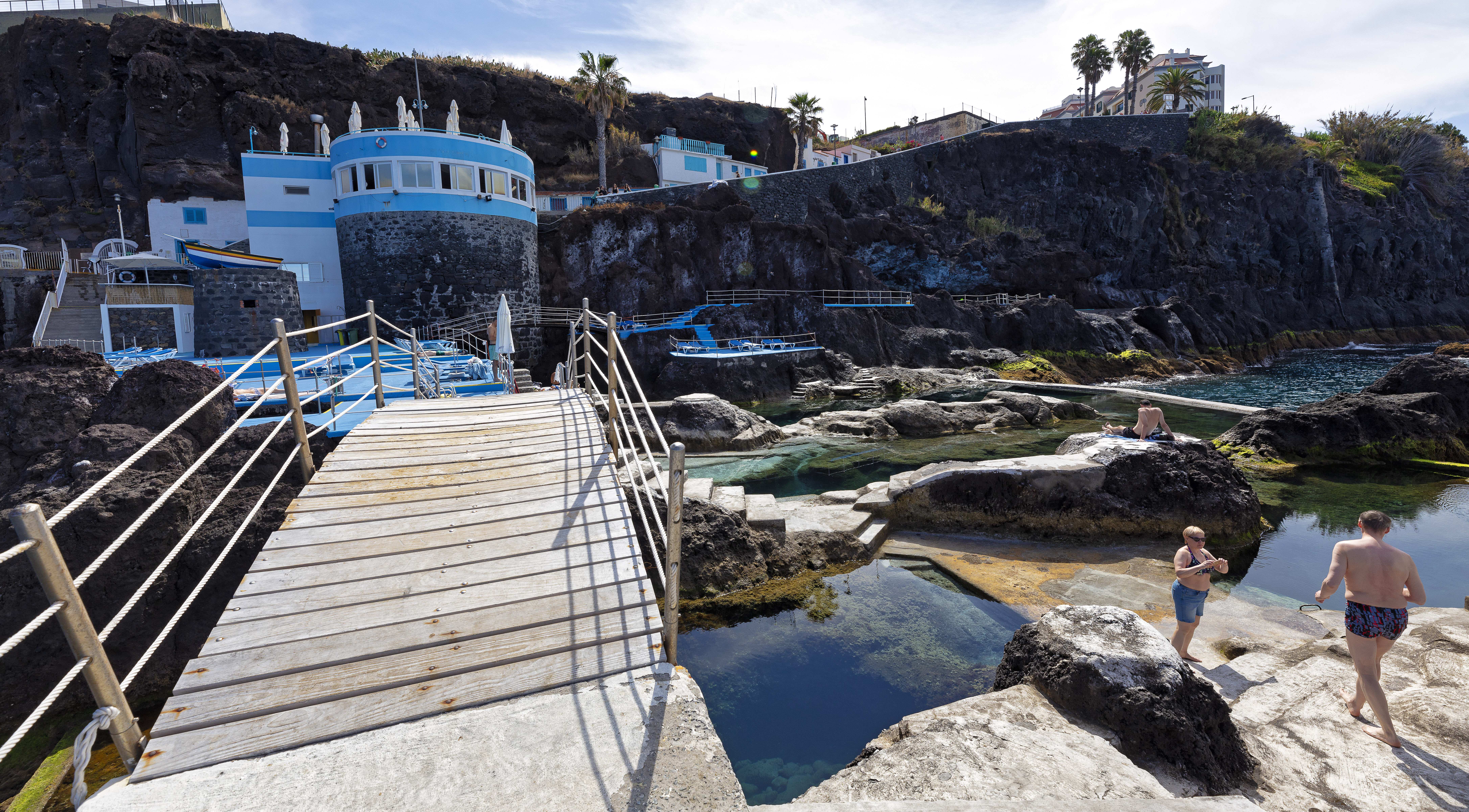 For people who live in Madeira, the notion of going to the beach can be difficult idea to grasp. The concept of yellow sand stretching out and into the soft waves is something that belongs to the imagination, and the neighbouring island of Porto Santo, which sports one of Portugal’s best beaches.

In Madeira, things are different. Going to the beach in most cases means using one of the many accesses to the sea in places where there is no beach. Others can be accessed by the general public.

What at first sight might seem a bit strange ends up becoming one of the man images of bathing areas all around the island. Little piers, natural pools, slabs of stone and beaches of pebble stones or black sand.

One of the advantages of this kind of ‘beach’ is the immediate contact with the freshness of the ocean, as well as the ability to jump into the water and the fact that the sand does not cloud the water as the waves crash.

Doca do Cavacas, in Funchal, is an example of one such place. It is a small complex built around natural pools, called Poças do Gomes. Access is paid and there is year-long surveillance, as well as a supporting bar.

Right on the other side of a small tunnel is Praia Formosa, the main bathing area of Funchal, with an extension of over 2 kilometres. Sand alternates with pebbles and the beach is divided into four zone: Nova, Formosa, Namorados and Areeiro. This is the only beach in Portugal adapted to blind people.

Another reference, also for historic reasons, is Lido. The original pool was built in the 1930s and since then has served as an access to the sea for many generations of Madeirans and visitors, having been remodelled many times throughout the ages.

If in Funchal most of the accesses to the sea are man-made or part of hotels. Beyond the urban area the offer is much wider and more diversified, often blending different concepts. In some cases, there is even the possibility to swim inside a natural reserve, like in Garajau, where a magnificent beach is frame by the base of slope, accessible via a cable car.

Natural beauty is a staple of the sea accesses of Madeira. The little shores to the east of island, like Cais do Sardinha, in the iconic Ponta de São Lourenço, are a good example. To get there, one needs to walk for about an hour from the end of a road. But the experience pays off. The water is crystal clear and the beach is ruled by tranquillity.

Another nearby shore sports its own unique feature. It is the only beach in Madeira where the sand is lighter, without the colour of basalt. It is called Prainha, and is almost hidden away from the preying eyes of drivers, accessible via steep stairs. Around it, only the sea and a wall formed by the slope.

Also in Caniçal is Praia da Ribeira de Natal, which come to rise in popularity. It is made of pebbles but its extension and even the pier invite you to dip your toes in the water. Access is easy and free. There are parking spaces and during the bathing seasons the beach is surveyed by life guards. There is also a promenade, and a supporting bar, Ritual do Sal, which helps to set the mood.

Following a path westward, Fajã dos Padres offers a unique experience, starting with the access, which is can only be done by sea of by cable car. The land by the sea here, is the result of many collapses, and sports an iconic pier, a solarium, as well as the beauty of the slope itself.

Near there, Calhau da Lapa is also accessible by sea. But most people who come to bathe in this small, half-hidden complex come here via a steep path that descends from the road in Campanário. Down below, the water is clear, and the view of the horizon boundless.

Staying on course, the area of Ribeira Brava and Ponta do Sol offers beaches and bathing complexes. This area enjoys Madeira’s milder climate, which extends to the neighbouring municipality of Calheta. Though perhaps best known for its artificial beach with yellow sand brought from Morocco, this town has several natural beaches with an identity of their own.

Down the same avenue, there is a further access, more reserved, in front of the Savoy Saccharum.

In Jardim do Mar, an area known for surf, Portinho is an option that is much sought during summer. It is near Paul do Mar, land of fishermen, where the port is also sought by those wanting to go for a swim. The best known beach is probably Ribeira das Galinhas, also recommended for surf or alternative fishing, as well as offering beautiful sunsets.

On the North coast the sea is different, and so is the landscape. It looks as though it is another island altogether. The microclimate of Madeira helps to explain this phenomenon. To the north the mountains are more abrupt, the sea is darker and some of the beaches and sea accesses are enveloped in a luxurious landscape.

In this regard, Seixal is a must-see stop. This shelter harbour combines black sand with the smoothness of the wanes and views over a standout Nature. It is one of Madeira’s trademarks, and is even used for tourism advertising purposes.

The Seixal Yacht Club complex also offers a natural pool and free access, all framed within a unique landscape. Poças das Lemas or Praia da Laje, also called Praia da Jamaice are much rawer. The latter stands between rocks in a landscape that blends the green of the mountains with the blue of the ocean.

In the northernmost extreme lies one of Madeira’s most iconic images, the natural pools of Porto Moniz. For decades now they have been the object of many photographs and much admiration. The bathing complex that encases them is sought more and more for the freshness of the seawater that fills these lava pools. With a 3, 800 m² solarium, this is a surveyed complex that offers visitors every service, from umbrella rentals to sun loungers.

Right next door is another set of natural pools, by the Cachalote restaurant. These are very deep, with their waters being still, topped up by the rising of the tides.

Examples multiply in the North coast. They are not exactly natural pools, and many of these beaches are not surveyed, and can be difficult to access. But in the seaside of São Vicente, Ponta Delgada, the mouth of the Faial creek, or in Porto da Cruz. There are surveyed and well-equipped bathing complexes, as well as the popular Calhau de São Jorge, at the mouth of a creek, where sweet water lagoons coexist with the salty sea.