The Fish Square at the Farmers’ Market displays an aspect of Madeira’s identity and its connection to the Atlantic. 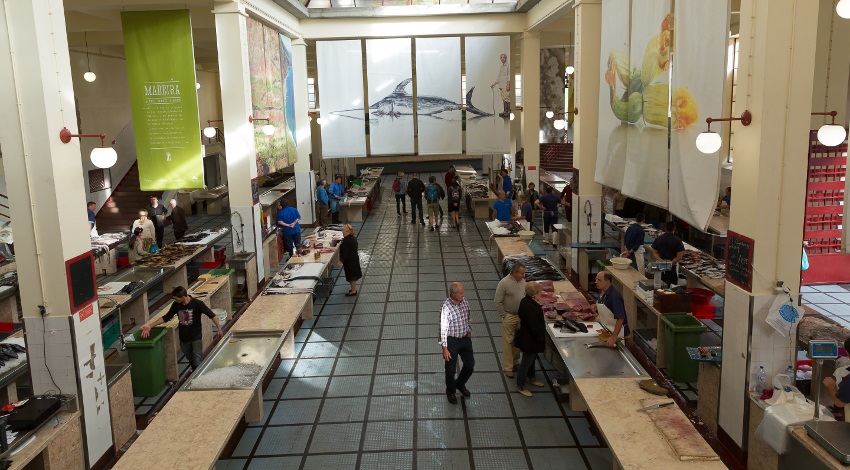 It’s Saturday and the clock shows it is 9 a.m. At the Fish Square of the farmers’ Market, the people coming in and out are in large numbers and make for distinct sense of hustle and bustle. The atmosphere is one of many colours and shrouded in an intense smell of the sea. Fish are laid out in several stalls and their freshness comes out of each and every one of them.

For many Madeirans this is the day to go out and buy their share of fresh, regional products, including fish. Tourists enjoy the morning to satisfy their curiosity and see the makings of the traditional regional fish market and what can be found there. Most tourists get carried away and immortalize their visit by taking pictures. They talk to the sellers and want to know each and every little detail about the fish they sell in the square.

This is where we find José Gonçalves. He has 40 years of experience, not counting the many he spent as a child helping his family out with the business. He lives and breathes the market’s tradition on a daily basis. His routine starts at seven in the morning, the time around which he receives almost half a ton of fish for his stall.

‘The market opened in1940’, he tells Essential. ‘The merchants from the old square came here later. They all came here to work and that was when the market started to take off’.

At the Fish Square, people seek essentially fresh fish off the Atlantic Madeiran coast. Coming mostly from open sea, we find ‘our cleaner wrasses, our groupers, or red snappers, our black scabbards and tuna, which is always fresher here. People come here seeking quality’ emphasises José Gonçalves. There is also fresh octopus but the fish sold here need not be strictly from Madeiran waters. Also for sale are the ‘gilt head breams and snooks from Greece and Spain and the wrasses and groupers from the Azores’. 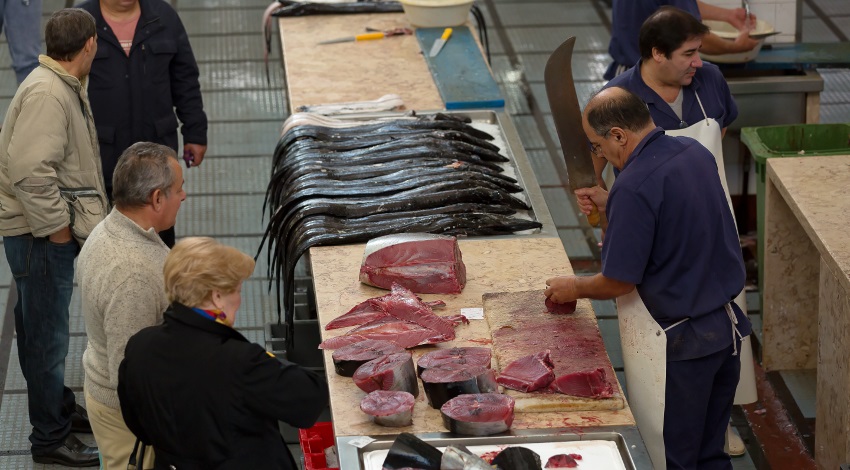 For Madeirans, the fish that is most bought, as per the dictates of tradition, is the black scabbard and tuna. ‘The market can be quite empty when there’s no tuna, it becomes fuller when there is tuna’ points out José Gonçalves. Other than these, the most sought fish are the Atlantic horse mackerels, when it is their season.

For tourists, those who own a house in Madeira as well as those who come here just to spend a few days, the Fish Square at the Farmers’ Market is a definite must. ‘The bustle, the way of working, the costumes’ all are elements of what gives the Fish Square its own identity. In the experience of José Gonçalves, this space remains wonderful and beautiful to its visitors: ‘they like it and they come back, they go back home and then they come back’.

For hotels and restaurants, the Fish Square remains a well-known place. Being demanding up to point, they all come seeking the freshest fish, specially to cook traditional dishes. Fish is the main star in many of the culinary wonders of Madeira, a good example being the fried tuna steak with special sauce, the black scabbard served with fried banana and passion fruit or even the skipjack tuna. When it comes to shellfish, limpets have deep roots in gastronomic tradition.

Inaugurated in November 1940, the Farmers’ Market has always been a trade hub specially for traditional products. Like many of the food markets from around the world it is representative of day-today life on the island. For those who visit Madeira, many of whom live far away from the ocean, the Fish Square represents a bit of the sea, brought to land.