On the north coast, the church of the São Jorge parish stands as one of the prime examples of the baroque style in Madeira. 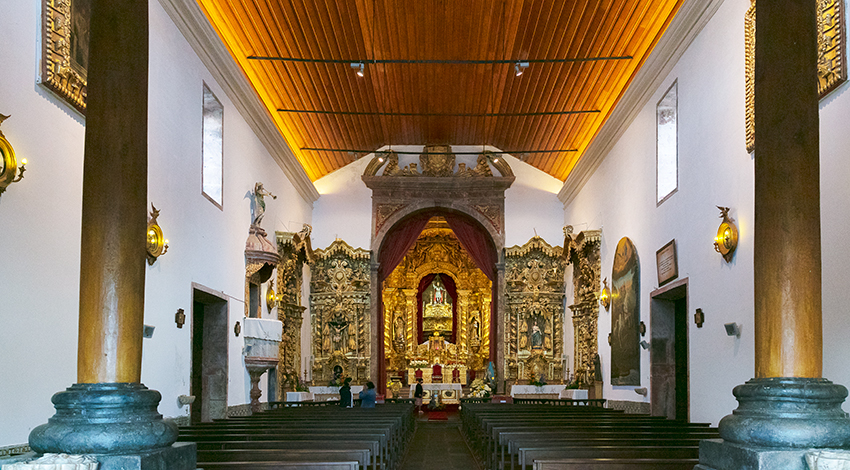 You can see it as you drive along the Madeiran coast. The São Jorge church, the main church in this parish, is a landmark as well as one of the best embodiments of the baroque style on the island.
In line with the wider baroque movement in Portugal, the building’s exterior is rather restrained, masking its relevance. Still, the church’s façade is somewhat uncommon for the context of the island. Above its portal are three sash windows and a further one in the tympanum, with a pilaster to each side both supporting the straight cornice.
But it is inside that one can fully grasp the splendour and beauty of this church. The sets of gilded wood found in the many lateral and collateral retables are decoratively exuberant, typically baroque, culminating in the rich retable of the main chapel where the equally noteworthy lateral paintings also framed in gilded wood can be found along with the painting in the vault, painted with the tromp-l’oeil technique which creates an optical illusion of three dimensions where in reality there are only two.

The furniture in the rococo style must also be mentioned: the table and cupboards are carved out of tilde, with twisted columns in that style, present in the sacristy of the church, as well as the cross that can be found there.

The building’s plan is longitudinal sporting a single nave, a narrower and lower main chapel, a bell tower and, wall-to-wall with the church, areas which correspond to the parochial dwelling and sacristy.

According to the aprenderamadeira.net online encyclopaedia, the church was designed by Diogo Filipe Garcês, royal Master of Works, but realized and built by master Pedro Fernandes Pimenta. Construction works began in 1737 and its consecration too place in 1761. According to the same source, some elements were drawn from an earlier construction. The late gothic pinnacles and a late 16th century tile panel in the Iberian-Moorish style are all that is left from the early church, edified upon the cobble beach in the 16th century.