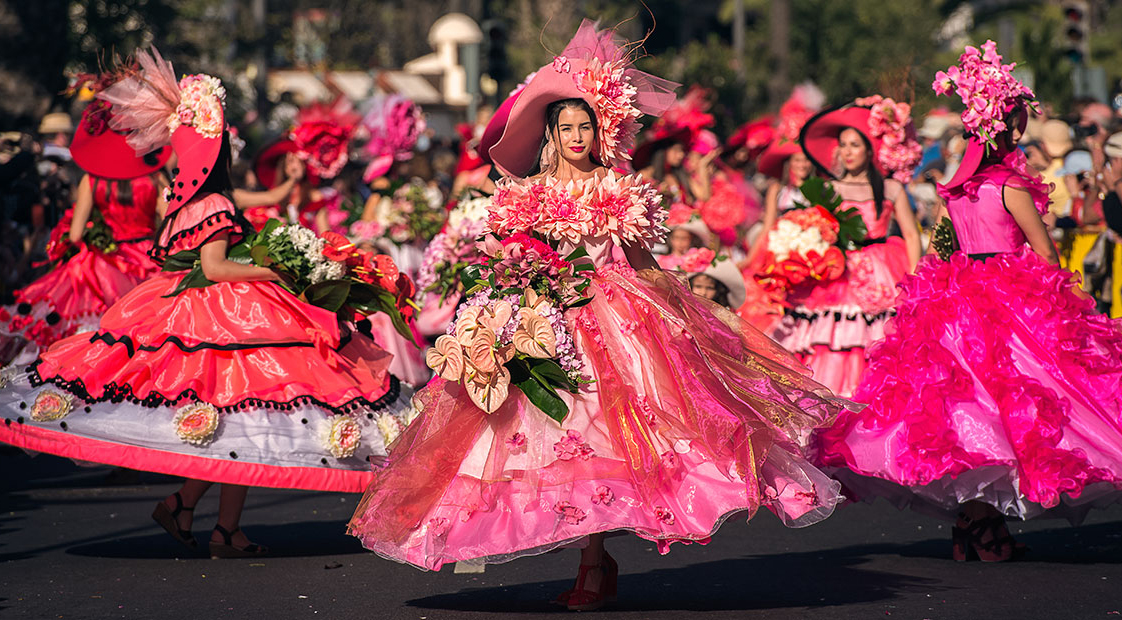 Things have been like this for over 60 years: Madeira celebrates the arrival of spring with the Flower Festival.

Between the 2nd and 19th of May, the central areas of Avenida Arriaga are the epicentre of celebrations, with the typical floral carpets that make the delights of many who visit what is one of the main tourist attractions of the island.

Throughout this period there are exhibitions of flowers grown on the island and typical artisanal pieces of Madeira like the Madeira Embroidery exhibition.

The downtown is plentiful in entertainment, with many performances by folk groups and philharmonic bands. There is also regional gastronomy. At the Regional Flowers and Flavours Market one can enjoy the floral richness of Madeira as well as the typical food and beverages of the region.

One of the ceremonies also included in the programme is the children’s parade. Upholding a tradition that goes back to 1979, May 4th sees children dressed in costumes take to the streets at around 11 a.m. and walking down to Praça do Município. Each child takes a flower to build the ‘Wall of Hope’ in an appeal to World peace. This tribute is complemented with the release of pigeons and a children’s show.

The main attraction is the Allegorical Flower Parade, held on Sunday 5th May at 4 p.m. in Avenida do Mar, with plenty of music, dancing, colour and flowers. It includes adults as well as children in costume, together with allegorical floats. A total 14 groups participate.

The programme includes the exhibition of Allegorical Cars, a display of classical automobiles adorned with flowers.

Four concerts are held in some of the most emblematic gardens of Madeira between May 16th and 19th – the Flower Concerts.

Performing on the first day at 7 p.m. are the Black & White Dixieland Jazz Band, in the Quinta das Cruzes Garden.

On the 17th, the concert takes place at the same time in the Garden of Quinta Vigia with the Baroque Ensemble (MCO). The concert of the third day, played by the ‘Os Artistas’ Municipal Band and Triova Voices is at 5 p.m. in the São Vicente Caves and Volcanism Centre Garden. The concert cycle ends on May 19th at 5 p.m. in the Theme Park Garden in Santana, with the Imperatriz Sissi Orchestra and the Prestige Dance Club.

Between May 23rd and 26th the ‘600 years in Bloom’ floral installations can be enjoyed in Avenida Sá Carneiro, at the entrance of the Pier of Funchal and by the Madeira Legislative Assembly. These floral sculptures are a tribute of sorts to the variety of Madeiran flora.

In lieu of a closing ceremony, the activity programme features a display of ancient and classical vehicles of the region in Praça do Povo, held on the last weekend of May, on the 25th, and organised by the Madeira Classical Vehicle Club.