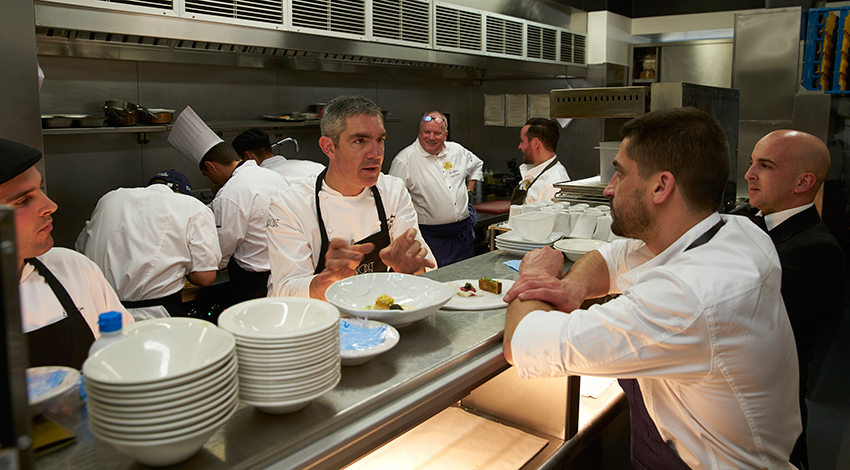 The 9th edition of the Stars Route gastronomic festival, which will take place on March 10, 12 and 13 in the Il Gallo d'Oro restaurant, will comprise three gourmet dinners that are preceded by a "Champagne Cocktail" with the presence of invited guests.

Some of the dishes that will integrate the menu for these days are Crab and Caviar Sturia, Strawberry XXL, Pomme d'Amour, Robalo Mee 2018 or Dim Sum of black pork with spicy bio carrot juice.

Portuguese wines are also highlighted, as they will be suggested by some of the best sommeliers in Portugal in the harmonization of each tasting menu composed of six dishes.

The recently honored "Sommelier of the Year" in Portugal by the Wine Magazine, Sérgio Marques, sommelier of the Il Gallo d'Oro restaurant, will be joined by António Lopes, Georges V and João Chambel.

In the kitchen of the Il Gallo d'Oro restaurant, 11 national and international chefs, most awarded 1 or 2 Michelin stars, lay the foundations for another edition of the Stars Route.  The Cliff Bay Hotels executive chef, Benoît Sinthon, will be assisted by the following chiefs:

A native of Austria, Chef Dieter Koschina, launched Vila Joya on the list of the 50 best restaurants in the world. This award-winning Michelin-starred restaurant combines local produce with Northern European cooking techniques.

Started as an apprentice cook at Dutch restaurants with Michelin stars. Shortly afterwards she went to live in Switzerland, where she met a young Portuguese girl with whom he would marry. Returning to the Netherlands, Michel worked in several prestigious restaurants, until obtaining the official Dutch degree of Master Chef. In 2006 he became the Executive Chef of 't Nonnetje, for which he won a Michelin star in 2008 and the second in 2015 with creative, light and contemporary cuisine from the products of land and sea.

Bart De Pooter has a clear vision about food, cooking and food. Driven by its passion for regional and ecological products, its cuisine in the restaurant De Pastorale, near Antwerp (Belgium) is based on freshness, novelty and transparency.

He has been executive chef of the Ocean restaurant in the Algarve since 2007. In 2009 he was recognized by the Michelin Guide when the first Ocean restaurant was awarded its first Michelin star. Two years later, he sees the restaurant conquer its second star.

Young and talented, Ricardo Costa has passed through several European cuisines. His talent has been progressively recognized by the prestigious Michelin guide. His ambition and interest led him to accept managing the kitchen of The Yeatman, in Porto, where he won two Michelin stars.

He is one of the few Michelin-starred vegetarian Chefs. After traveling through the top gastronomy in Germany, Austria and Switzerland, Paul Ivi? there is no doubt that "Tian is the place where I want to be". The philosophy of this restaurant is to share with customers a passion for gourmet, sophisticated and vegetarian cuisine. The Tian restaurant has been a Michelin star for five years.

With more than 19 years of experience, chef Kazuo Harada grew up surrounded by the Asian culinary tradition.His grandfather, who for many years ran a small Japanese restaurant in São Paulo, taught some of the techniques that Harada uses to this day in his kitchen. He went through great restaurants, including Kinu, Japanese Grand Hyatt Sao Paulo, where he stayed for 12 years. It is in Mee, the Pan-Asian restaurant of the Belmond Copacabana Palace, where it features a menu that is a true journey through Asian cuisine, with options of Thai, Korean, Vietnamese, Chinese and Japanese cuisine.

Hans Välimäki was the first chef to win two Michelin stars in Finland. Välimäki's Chez Dominique restaurant, running from 1998 to 2013, was awarded a Michelin star in 2001 and two stars in 2003, which it held until its closure.

Chez Dominique was the only Finnish restaurant to rank in the top 50 of the world's best restaurant six times in a row between 2006 and 2011.

He has worked in several distinguished Michelin-starred restaurants such as La Cabro d'Or and L'Auberge Provençale. Since 2009 it is at the head of the restaurant of the hotel Châteaux d'Audrieu belonging to the chain Relais & Châteaux. The source of inspiration of his creations are the products and techniques present in the gastronomy of Provence. Chef Olivier reinvents the menu always based on the fresh produce of the region of Normandy.

From a small village in central France, David Faure, is a chef with a career out of the ordinary. Pastry chef at age 19, chief executive at age 23, worked for 7 years in the largest restaurants in Paris in contact with the most famous French chefs. Since 2011 he works with his wife, Noëlle, around the world. His showcooking has already arrived in Japan, Morocco and Madeira, on the Star Road.