With summer enthusiasts gone, Porto Santo returns to its peace and quiet. Fall is plentiful in opportunities and even going to the beach is a different experience. 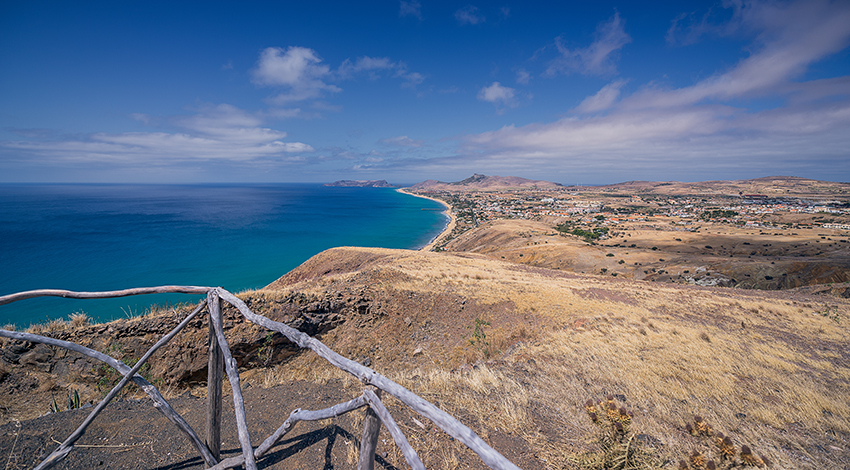 Historical sources date the discovery of Porto Santo as 1418, after a storm at sea threw a vessel that was following the African coast off course. The captain of the expedition João Gonçalves Zarco and his crew were saved when they found the island and thus dubbed it Porto Santo, literally meaning a ‘holy port’.
Nowadays historians venture that there was actually the intent to arrive there meaning that the discovery of the island was not a matter of chance. What is fact is that the Portuguese settled in Porto Santo making it the first new land of the Portuguese maritime discoveries.
Celebrations for the 600 year mark are being held throughout the year. Commemorations include Madeira, discovered in 1419, and extend until 2020. On November 1st, the date when the Portuguese first arrived, there will be a ceremony with the presence of the President of Portugal, Marcelo Rebelo de Sousa. But the programme includes several other cultural and leisurely activities.
In themselves, these celebrations are an added bonus for Porto Santo in the fall. When the ruckus of summer, a season in when the population of the island quadruples in size, is over, this season comes as an alternative. The temperature. The cleanliness and warmth of the water, certainly among Europe’s best. And the dazzling beach, ideal for a swim, sunbathing, physical activities or simply a walk.

Acknowledged as one of Portugal’s 7 natural wonders, this beach, comprising over 9 kilometres of yellow sand, is known for the therapeutic properties of its sands, a scientifically attested fact. This therapy is appropriate for any who suffer from rheumatic and orthopaedic afflictions. It is constituted by microfossils, fragments of calcareous algae, mollusc shells and other marine fossils.

The landscape of Porto Santo’s south coast includes two visible islets. They look as though they are standing guard as sentinels of sorts being less than a kilometre away from the island. Ilhéu de Cima and Ilhéu da Cal, as they are known, are stop points in boat tours.

Nélio Mendonça, owner of Mar Dourado who offer this service, explains that ‘customers are transported by boat to the access pier and start their climb to the top of the islet’.

The boat ride includes a stop by the lighthouse where an assortment of regional products is on display. On their way down visitors have the chance to go snorkelling, an activity which Nélio Mendonça assures ‘bedazzles anyone because you can observe several fish that can only be seen in natural reservations’.
Another activity for the fall season and beyond is horse riding. Paulo Ornelas, the manager is adamant that anyone can ride a horse, even if they have no previous experience. He says every ride is different. On the mountain trails he visits the Morenos area, Zimbralinho, Miradouro das Flores and Pico de Ana Ferreira.

Also a good thing to do in the fall is to quite simply observe and get to know the island. Sofia Santos, a true ambassador of Porto Santo is a guide with the Lazermar service. The firm organizes minibus excursions, 4x4 jeep circuits and walks.

Sofia Santos explains how the walks are used to divulge and share a lot of information through the guides doing the tours, ranging ‘from the actual history of the sites where we walk to the geology of the island, how the mountains were formed and where the sand came from’.

Walks lead to Quinta das Palmeiras which at first sight may seem like an oasis. It is a small botanical and zoological park where several animal and exotic plants species coexist.

A further stop is Casa da Serra. It comes across as a travel through time. There is the history of the site, told through the tales of the guides, and then one can observe traditions. There are utensils used for the harvesting of wheat, a well and typical farm animals.

A glass of wine from Porto Santo is offered at the entrance with some typical sweets from the island. The house’s interior functions as a museum, with ancient objects and explanations of geology and culture. It shows how people lived in the 18th century. The grinding stone is in display along with old irons, the kitchen with a wood-fired oven, the stone to bake the traditional bolo-do-caco flatbread and a bedroom where all the furniture is originally from that century.

Walking can also take you far in Porto Santo. Several recommended trails, all properly signalled, offer different perspectives on the island. The tranquillity that abounds in these paths and the landscapes blending mountain and sea make it worth it.

One of the best known paths is that of Vereda do Pico Branco terra chã, comprising a distance of only 2.7 km. It is one of the island’s most beautiful spots. A true sanctuary of natural life.

Pico Ana Ferreira is another reference for its prismatic disjunctions that form a set of carved volcanic stone columns. It can be visited on foot and by car.

Ana Ferreira is right next door to another place worthy of being visited, Porto Santo Golf. It has been acknowledged as one of Europe’s best courses and combines the practicality of the sport with amazing views of the south and north of the island. It was designed by famous golf player Severiano Ballesteros and the result was an excellent blend with the landscape.

The course is PAR 72 comprising 18 holes over an extension of 6.434 metres. The southward course is traditionally American, with ponds and demands a precise game. The northward course develops over the course of cliffs. There is also a PAR 3 nine holes pitch-and-putt course and a driving range.

The Clubhouse more than just supporting the course is also a true leisure space where one can enjoy the lovely views or a meal in the restaurant. It is held by many to be one of Portugal’s most beautiful golf courses.

There is no shortage of things to do in the fall when in Porto Santo, not forgetting the romantic end to every afternoon, flooded by the golden light that adds to this island’s nickname… the golden island.