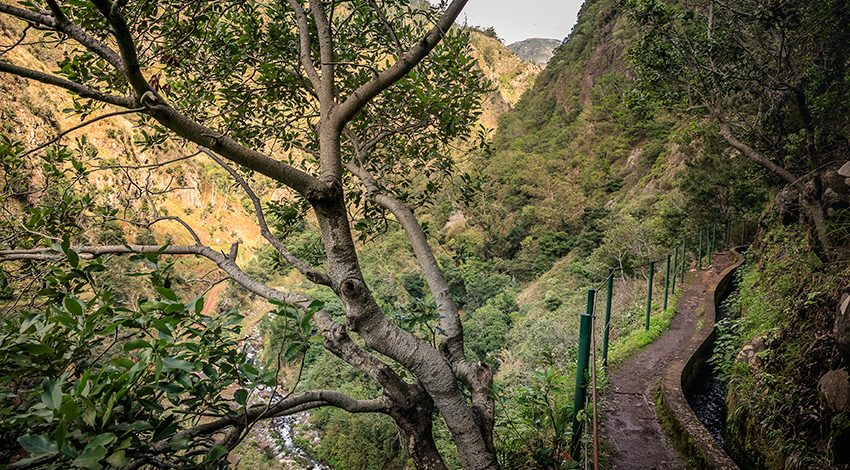 Levada do Moinho and Levada Nova are two beautiful footpaths which complement each other and are rich in surprises.

Known as the municipality of the arts, Ponta do Sol also hides a lot of beauty in its footpaths and levadas. The natural landscape of Ponta do Sol can be appreciated from Cascata dos Anjos, on Regional Road 101, as well as from the Levada do Moinho – Levada Nova footpath, especially renowned for its magnificent waterfall.

Built between the 1920s and the 1930s, Levada do Moinho starts out from Lombada da Ponta do Sol, by the Lombada Chapel, where the waterfall converges and where there is an old windmill which can even be visited and after which the levada was named.

At the beginning of the path, cultivated agricultural plots stand out. In between them, you can glimpse amazing panoramic views of the town of Ponta do Sol. Divserity abounds along the path, be it in terms of beauty, be it in terms of the variety of flora and fauna, with endemic species like the marmulano, Canary laurel and the picconia excelsa.

Throughout the path we find waterfalls. You can also sometimes see Levada Nova, which is located at a height of around 200 metres above Levada do Moinho.

The first part of the course ends in an area with tables and benches where you can enjoy a picnic in the heart of the vegetation.

From here on out, the climb to Levada Nova, also known as Levada dos Zimbreiros, can be a bit more demanding. Then, the path continues in the direction opposite to the water stream of the levada. After around ten minutes, we find the much-touted waterfall, on the margin of the creek of Ponta do Sol.

The waterfall is particularly peculiar given that it is framed by the rocks, ending up a part of the levada. We enter a stone arch, passing under the rock and the waterfall which overlaps with the footpath.

From there on, one has the option to return by going back the same path, or carrying on to complete a circular trail, of sorts, continuing through Levada Nova. The latter is more demanding and is not recommended to less-experienced hikers. In fact, these paths are not part of the networks of recommended trails in Madeira, though they are accessible to the public.

The Levada Nova path takes you to a tunnel right after the waterfall, which, in spite of the glimpses of light it gives, does require a guiding flashlight. The path leads you through sugarcanes and other agricultural fields and ends practically at the same spot that Levada do Moinho starts from, a bit higher.

The main goal of Levada Nova was to supply irrigation water to the lands between Ribeira da Caixa and Ribeira Brava. It is over 50 km long, counting from centre of Calheta.

The easier option is to reach the beautiful waterfall, enjoy the moment that is considered by many the highlight of the footpath, take some pictures, and return via the initial Levada do Moinho path, returning to the point of departure.

All in all, it is an extension of 8.5 kilometres, and 3 to 4 hours of journey. Adequate shoes and clothing are recommended, as well as some extra equipment, in case you want to walk both levadas.