Terrantez is a rare grape variety which makes unique wines and that Madeira wants to save from extinction. 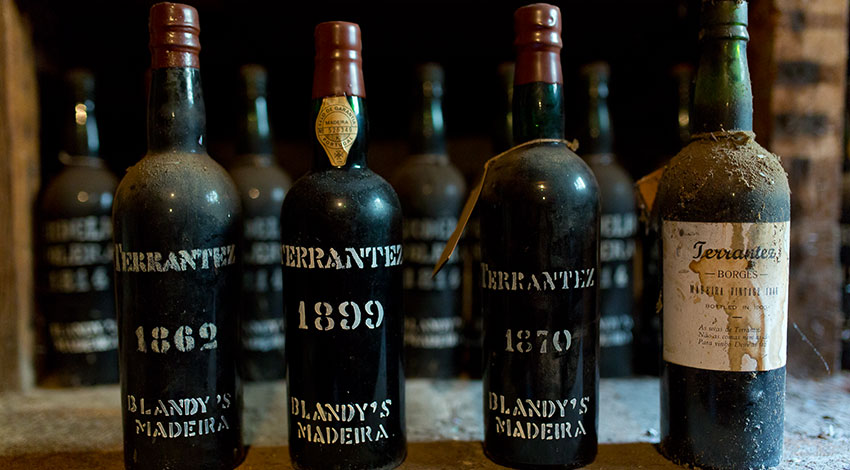 Back in December 2014, a lot of several bottles of different Madeira wines were up for bids at Christie’s, the famous auction house in New York. One of those bottles was described as the oldest one in the world. The year is of 1715 and the wine was aged for over a century and half in barrels before it was bottled. The lot belonged to Braheem Kassab, a Syrian embroidery trader who purchased a great selection of Madeira Wines. The wine was a 1715 JCA and CA/Kassab Terrantez. But the most impressive of this story, besides the age of the wine, is its price: The bottle was sold for 26.950 dollars (around 24 thousand euros).

At the same auction there were other successful stories, such as the sale of a Terrantez Reserva of 1820, a lot of 4 bottles were sold at 23.275 dollars (around 21 thousand euros). The wine originated from a family reserve, one of the many which existed in Madeira back in the XIX century.

It is also worth recalling that at that very same auction, other bottles were also sold such as a HM Borges of 1760 at 10.413 dollars (around 9 thousand euros). Henrique de Menezes Borges became famous for his aged wines, some of which are still up for bids at auctions.

This year the auction is scheduled for November at the same auction house and will include another bottle of Madeira Wine. The year is 1795 and the wine was bottled at the beginning of the XX century. This harvest is a well-known one, possibly because it started being consumed when, during the Napoleonic Wars at the beginning of the XIX century, British forces settled on the island of Madeira. Oenologist Francisco Albuquerque explains that there are five references of this year available on the market, bottled by different companies.

For instance, the National Wine Cellar, which serves as a price guide, is currently selling a 1795 Terrantez Companhia Vinícola da Madeira for the price of 3.950 euros.

But at the wine cellar there are other bottles of the Terrantez grape variety of more recent harvests and a price range which is still worthy of mention: 264 euros for Blandy’s 1976; 195 euros for a Cossart 1977 or even a D’Oliveiras 1988 for 130 euros, just to mention a few.

All these stories refer to Terrantez wines.It’s a white grape the same as Malvasia, one of the two most noble wines of Madeira. However, contrary to the Malvasia which is widely cultivated, the Terrantez fields have been gradually disappearing. Therefore wines from this grape variety are highly valued. But that is also due to the fact that Terrantez produces some of the best Madeira Wines ever made.

At presentations carried out to hundreds of tourists or during promotional campaigns throughout the World, it’s common to say that there are four main grape varieties which are used to produce Madeira Wine: Verdelho, Sercial, Bual and Malvasia. Terrantez is the fifth element.

Francisco Albuquerque recalls that some of the great Madeira Wines, “those which made us internationally famous, are produced from the Terrantez grape variety.”

Due to their history and mainly due to their commercial value, the Regional Government of Madeira has to stimulate the cultivation of Terrantez. In order to do so, technical and financial aid is provided to wine producers.

Paula Cabaço, president of the Madeira Wine Institute, recalls that “it’s an extremely traditional grape variety” and emphasizes its increased demand as well as the many requests for information by journalists and professionals. Oenologist Francisco Albuquerque views this as a “smart move”, which will make way to explore a niche within the Madeira Wine market.

Technical support will be ensured throughout all the stages of the production process as, to a certain extent, Terrantez is a delicate grape. Paula Cabaço explains that this grape variety renders fewer kilos per square metre than the other varieties do. The grape bunches have a very fine encasing. “If during the maturing stage the conditions aren’t ideal”, such as being affected by the humidity associated to the heat, the grapes can become infected with fungi which cause them to rotten. Francisco Albuquerque agrees this is a “complicated grape variety”.

But when the production is carried out without any problems, Francisco Albuquerque has no doubts: “It produces exceptional wine”. Paula Cabaço also refers to it as “top-quality wine”.

The oenologist mentions that “they are possibly one of the most particular and complex wines of Madeira”. It’s a wine that is defined due to its “sweet attack and a very dry aftertaste”. He also refers that locally, Terrantez wines have won many prizes: “No one is indifferent to these wines because the after taste is simply magnificent”.