The Vine was once again elected The World’s Leading Design Hotel at the World Travel Awards and Essential ventured into its soul. What we discovered was love… and a suite! 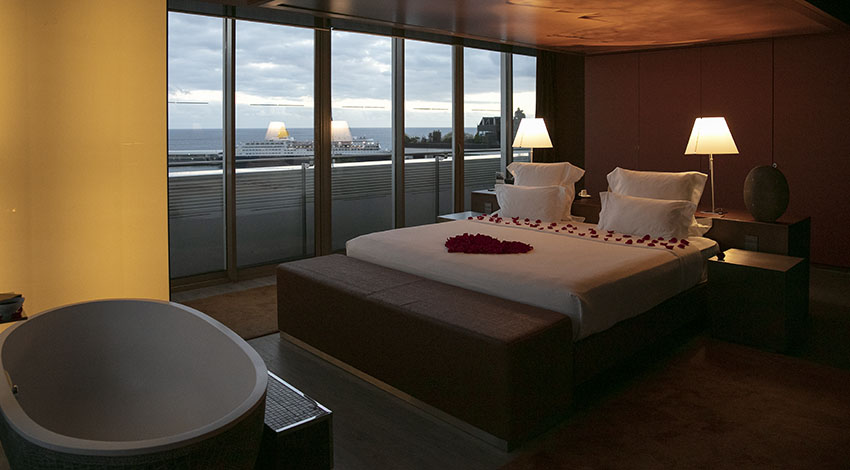 In the entrance lobby two glass displays accumulate trophies. They all look alike but are from different years and categories. They are World Travel Awards, the prestigious tourism awards which The Vine hotel has been accumulating over the last few years. The most recent one, for World’s Leading Design Hotel 2018, was obtained in December, in a gala held in Lisbon.
This is the second time this hotel takes the award, having opened its doors right at the heart of Funchal in December 2008. The first time was in 2013, when it also won the award for Europe’s Leading Design Hotel. The latter was again conquered in 2014 and 2015. In 2016 the hotel took the award for Leading Island Hotel & Spa.

The Vine is part of a building designed by renowned Catalan architect Ricardo Bofill. The interiors are by the famous Madeiran interior designer Nini Andrade Silva, who drew her inspiration from wine, interpreting its tones and textures. Each of the four floors which combined offer 78 rooms has a colour associated with wine through the seasons: green for spring, purple for summer, brown for autumn and grey for winter.

The floors in the halls mime traditional Madeiran pavements, made of small round pebbles polished by the power of the sea in the beaches of Madeira, the designer’s trademark. Inside the rooms, her expert touch can be felt in every nook and cranny.

The best exponent of the interior décor lies in the two panoramic suites located in the building’s fifth floor. Here one can understand some part of why this was chosen as the World’s leading design hotel. There is the comfort of the bed and the Egyptian cotton linen and framed by a panel of textures inspired by wine which lights up. There is the quiet light spread throughout the entire space, the tub ostensibly placed almost against the bed, or the view of the city climbing over the slopes, or the network of streets and buildings built over centuries in Funchal.

Every nook and cranny is an authentic scenery, to the extent that they inspired the hotel’s team to create an exclusive service which transforms these suites in sites meant for romance.

Teresa Gonçalves, The Vine’s general manager, tells Essential about the origin of this experience: ‘We always felt that there is an air of romance to this hotel’ and that is why ‘I challenged the team to think of something they would love to find in a hotel if they were on honeymoon or celebrating a special occasion with their partners’.

‘Love and a hut’ was the result, a dinner served in a tent, in a corner of the hotel terrace. Later they created the ‘Love in a suite’ package, where dinner is served in the intimacy of a panoramic suite. ‘We’ve had several wedding proposals as a result…’ confesses Teresa Gonçalves.

More than the ideal programme for wedding proposals, this is a good pretext for a special night for two.

The experience includes a stop at the Spa, renovated a year ago, also by Nini Andrade Silva. The concept remains the same, also inspired by wine, but the décor acquired smoother colours which according to Teresa Gonçalves mirror ‘the tranquillity of the resting earth, before seeds take root or when the roots of vines are resting during winter’.

A couple’s treatment if offered here. It includes a Wine Bath, paired with a tasting of red wine, followed by a Duo Massage, before spending time in the relaxation zone.

Meanwhile the suite is prepared for the moment. A bottle of champagne, fruit … candles. The table is set by the window. There is no lack of red rose petals spread all around.

The romantic dinner comes with a butler, who is in charge of serving the fiver courses, paired with a selection of wines. The task falls on Leonel Nunes, who is also the hotel’s sommelier. He is the one who presents the first drink of the evening, which is not a wine but a cocktail, the Velvet Love, created by barman João Vieira.

It serves as the cue for the violinist who plays throughout the dinner to come in.

The menu can be set by the client, who can also choose to be surprised by the suggestions of Chef Thomas Faudry. When this happens, flavours can be astonishing.

First, a lobster Risotto with grated parmesan cheese and arugula. Then a ‘mi cuit’ duck foie gras Medallion, orange and ginger marmalade, toast with nut. Followed by a roasted swordfish Filet, mushroom and chestnut fricassee which then gives its place to a roasted calf with pepper sauce, watercress salad with nut oil and sweet potato chips.

For dessert, a chocolate soufflé, with the suggestive name of Emotion & Reunion of ‘Grand Cru’ chocolate and its exotic fruit.

Service is serene and safe. Leonel Nunes answers questions and explains the details of the dishes as appropriate. He embodies what Teresa Gonçalves holds to be one of The Vine’s secrets: ‘an ever-present genuine smile and empathy’ which according to her ‘are positively pointed out by customers, in a very frequent manner’.

Two of the wines served with dinner are a limited edition, made through a partnership with Herdade do Rocim to commemorate the hotel’s 10 years, to be celebrated throughout 2019. Teresa Gonçalves explains that the intention was to create a ‘special edition red wine and white wine which would be a reflection of our personality. Strong in image, complex in structure but with a kind ‘heart’ and warm to any who want to discover it’.

The white wine, 2017 harvest, is a combination of the Antão Vaz, Arinto and Viosinho grape varieties. Leonel Nunes presents it as having ‘very floral and citric aromas’. In the mouth it is balanced, live acidity and constant mineral quality. It is a very consensual white, easily enjoyed’.

The red wine is a 2016 vintage made from the Touriga Naional, Alicante Bouschet and Aragonez grape varieties and aged in oak casks. ‘It has good ripe dark fruit, with some notes of black olives. It is a gastronomic red with tannins present but which shows elegance as a whole’, explains the sommelier.

All bottles are number as it is a limited edition. Teresa Gonçalves says that ‘the No. 001 bottle is in the possession of the hotel’. In total, 600 bottles of white and 720 bottles of red were produced and can be bought at the hotel.

During dinner, before romance, white wine bottle 318 and red wine bottle 248 were drank from…