Funchal welcomes the brand new Praça do Povo, a leisure area at the heart of its fully renewed seafront. 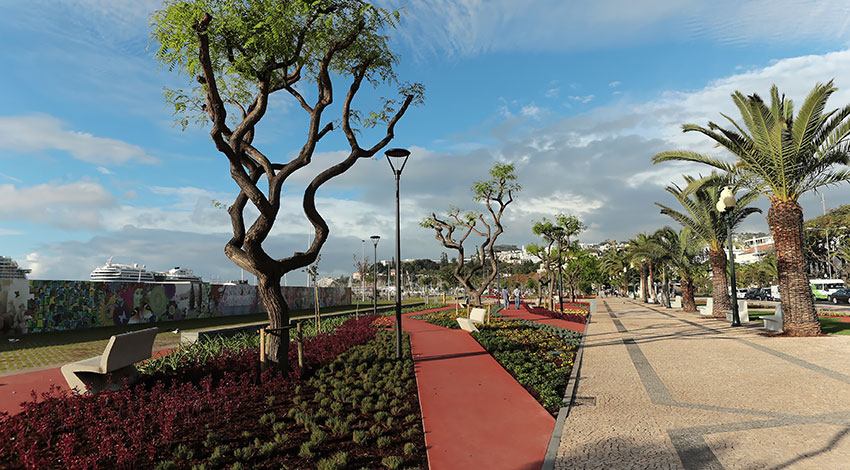 The sun always shines in Funchal and there’s a new beautiful place in town to enjoy it: Praça do Povo (People’s Square). Its many corners, benches and red-trailed gardens make this an ideal place for one to admire the landscape as there is absolutely nothing blocking the views. Being built only a few meters above sea level, it’s now possible to go for a walk with the sky and the horizon in the background, feeling the ocean around you.

Praça do Povo is the name chosen for the seaside’s centerpiece. Funchal had its seafront fully renewed and the result is a fresh faced city, filled with new leisure zones that brought the island closer to the Atlantic Ocean.

This Square is part of a bigger project that has completely transformed Funchal’s bay. It includes a renewed Praça da Autonomia and its impressive statue, as well as recovery works in São Filipe’s Fortress, dated from the 15th Century. Its remains have been discovered during the renovation works. The project also includes Avenida do Mar’s reorganization works along with a new cruise terminal, as well as a designated area for touristic seagoing vessels, a beach and vast garden areas.

This new area’s story begins with a tragedy once upon a time on February 20th 2010, when a violent storm struck the island, leaving a horrible trace of death and destruction behind. Funchal’s downtown was flooded and part of it, destroyed. The beautiful square that now embraces the ocean was a small beach at the time where the storm’s inert waste was disposed: over 20.000 trucks dropped a total of 100 .000 cubic squares of rubble, most of it mud and rocks. The equivalent to 2 football fields.

From that history comes the decision to build a square with a name that pays tribute to the catastrophe’s victims, as well as the people of Madeira in general, who have helped rebuilding the affected areas with courage and sacrifice, ever present and effortful. This square is a little gratitude detail that comes as a consequence, since the main works concerned the people’s safety and new structures have been built to protect the city against future storms and floods.

Our new square adds to the feeling of nostalgia, so typical of maritime cities. It is a beautiful place for those who wish to see the ocean as well as the ships that come and go, cruise ships and recreational vessels alike that are now so close to the observer that they can almost touch them. This is a peaceful place that allows its visitors to leave the city buzz behind. It’s places like these that make cruise ship passengers fall in love. Tourists for a day, this is where they choose to come back to and enjoy more of, so close to the sea.

The square’s benches and concrete steps, thought for contemplation, give this space a life of its own: complicity is felt between the families strolling by, the couples in love, the walkers and the sportsmen, as well as those who are simply enjoying the notion of space, so hard to get in a mountainous island such as Madeira.

Avenida do Mar was considered the city’s seaside for a long time and is now the central core of the pedestrian accessed seafront. On one side, the sea and the square. On the other, Madeira’s centuries-old historical buildings with so many stories to tell: São Lourenço’s Palace/Fortress or Funchal’s old Customhouse, now the seat of the Regional Parliament are just a few. Have a look at public buildings such as Funchal’s Captaincy, the current Customhouse or the seat of the Electricity Company and their typical Estado Novo facades, (Estado Novo translates as New State, the name given to the Portuguese dictatorship).

There is a lot to look at here, and the space freed allows people to do just that: to look around and really appreciate the buildings with a renovated sense of perspective and dimension.

The island’s seafront has undergone several changes throughout these six centuries of human interaction and every single one of them seems to have brought the sea closer and closer, tightening the people’s bond with the ocean.

A transformation of such magnitude, however, happened over a century ago, time when Funchal embraced its “port of call” vocation. A pier was thus built for the first time, and to this day it remains standing. It was considered the City gate for decades.

The pier’s construction was divided into 2 phases, the first between 1889 and 1895 and the second between 1930 and 1933. It soon became one of the local’s favourite leisure areas, and the tourists that started coming to our island for the holidays from the middle of the 19th Century also found it more comfortable to disembark into the island too.

A few years later, another deep change into Funchal’s bay would take place with Avenida do Mar, built from 1939 to 1942. The avenue borrowed some space from the beach and there was a lot of controversy around the works, but the end result ended up defining the city’s new image and a new relationship with the sea.

The area went from being some sort of open ceiling storing space, where ships were loaded and unloaded, to becoming an elegant avenue, following the bay’s contours. The walks on the avenue have been one of the favourite hobbies for Madeiran people since then.

No matter how many changes are made to the City bay, the sea will always be around, ever so close and sometimes rebellious, reaching out beyond the horizon.