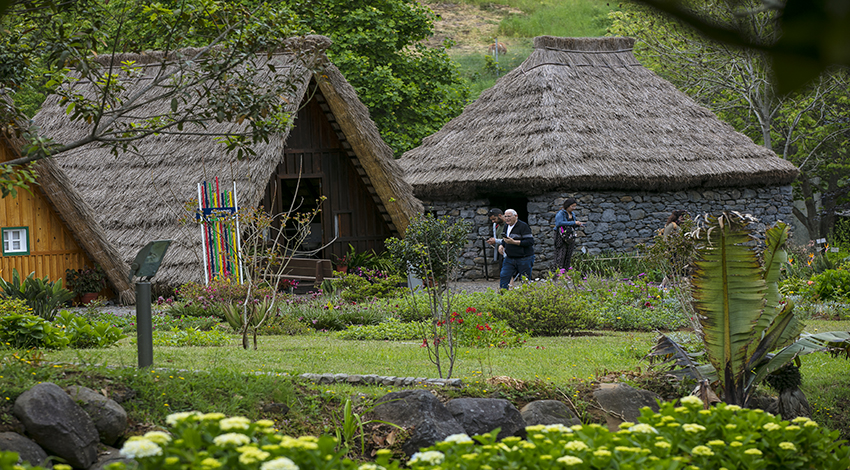 It is a place of innovation, but above all, where Madeira's culture and tradition are divulged in a fun way. Welcome to Santana's Theme Park.

The aroma of lemon and honey mixed with rum spreads through the air. In a typical Madeira grocery store, a traditional "poncha" is being prepared. Soon it will be ready to be tasted.

Nearby, in a wood-fired oven, traditional Santana bread is being baked, one of the many Madeiran delicacies that can be tried at the Aldeamento de Casas Típicas de Santana (Santana Village of Typical Houses), one of the three recent attractions of the Madeira Theme Park, which recreationally showcase Madeiran culture and ethnographic tradition.

The Village of Typical Houses is composed of five small wooden constructions, covered with thatch, as is the tradition in this part of the island. It also allows contact with several artisans, providing a different way to get to know these authentic artists who, with the commitment of old, showcase their work with wool, linen, Madeiran embroidery, and wickerwork.

Another recent attraction is the Quintinha do Parque. Here visitors have the opportunity to interact with several species of animals, in addition to activities linked to the rural world, such as helping to feed them. Besides reviving memory, this attraction recalls part of the daily life of Madeiran families. In this area it is also possible to see a Porto Santo Windmill.

Of more modern style is the Junior Pavilion, the third of the new attractions. It is a world of extreme activities, with swings, skateboards, climbing walls, trampolines, among other amusements that conquer the enthusiasm of the younger ones.

To visit the Madeira Theme Park, in Santana, is to embark on a journey into the past, to get to know, but above all to experience first-hand, in depth, the centuries-old history and tradition of the island. The park is a symbiosis between old Madeira games and modern attractions for all tastes.

Open to the public since 2004, with an area of 145 thousand m2, the park is a place that divulges and protects Madeira's ethnographic heritage, so that new generations as well as tourists who visit the place can learn about the island's roots. All this in an environment designed for families, a mix between the ethnographic and the technological.

The set of recent attractions also includes a new 3D video of the fantastic journey to Madeira. It allows you to experience the sensations of the rugged orography, full of mountains and valleys.

In the multisensory domain also fits a classic, the Discovery of the Islands pavilion, a journey that takes the visitor seated in a small boat, as if he were a 15th century navigator, who arrives for the first time at Madeira.

The Theme Park also has a children's area and a lake where it is possible to row, in small boats, as well as a store and restaurant spaces.

Nivalda Gonçalves, President of the Development Societies Board of Directors, the entity responsible for the Madeira Theme Park, highlights that the most sought after activities are the "replica of the Monte train", where visitors can go around the enclosure and the "ethnographic village".

However, "the thematic pavilions", the "hydrangea levada" and the "walks by the lake" are elements that captivate visitors and make the "Madeira Theme Park an indispensable place for the whole family".

For green space lovers, there is also the extensive garden to contemplate, where "some of the most representative species of endemic flora of Madeira are gathered", says the person responsible for the Theme Park.

For the summer months initiatives such as shearing, traditional games, performances by folklore groups, recreation of wool, wheat and wicker cycles, markets with local products and new thematic exhibitions are scheduled.

The goal, explains Nivalda Gonçalves, is to continue to offer visitors "a space of recognized cultural and ethnographic value that combines the educational aspect and the transmission of knowledge with an entertainment aspect for the whole family.

Proof that this approach has been a winning bet are the numbers. Since the beginning of the year and until April, the Theme Park registered 14,000 entries, an increase when compared to the period before the pandemic. Nivalda Gonçalves justifies this increase in visitors with the "recent reconversion project" that was based on an "intervention supported by European funds that involved an investment in the ethnographic valorization of the whole space".

In addition, with the recovery of the tourism sector "the Theme Park has tried to diversify the communication strategy to be able to reach several types of public".

The venue has established itself as a cultural and scientific centre for the dissemination of Madeira's history, with a set of dynamic initiatives that have brought new life to the space. And, without a doubt, the involvement of the local community has been preponderant both for the rigorous implementation of the original Madeiran traditions in the Theme Park, as well as for the social and cultural development of the municipality itself.

"The new activities include the creation of ethnographic experiences, thematic itineraries, the holding of thematic exhibitions in charge of local associations, and cultural events with the participation of traditional regional groups," a way to ensure the authenticity of the experiences, as attested by Nivalda Gonçalves.

Finally, the head of the enterprise also emphasizes the "contact with institutions, schools and other associative groups as part of the strategy to make the Theme Park more attractive to Madeirans, and currently the access to the outdoor areas of the infrastructure is free for the resident population".

The Madeira Theme Park is one of the main tourist attractions in the municipality of Santana.