Europe’s largest bookstore displays its books by the cover and offers you a true travel through the world of literature. 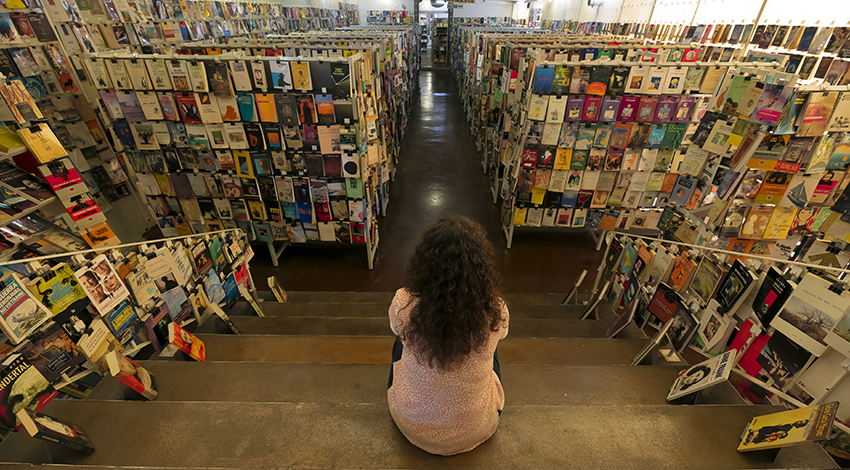 The sensors at the door sing of a new arrival. The hallway becomes a path for the discovery of a yearned for book. On the right side of the wall, in that same hall, is all the information about the space, and down at the end, on the top of the wall, a framed photograph of the person who founded the space. This is how a walk inside the Fundação Livraria Esperança bookshop begins.
Cátia Câmara, granddaughter of the bookshop’s founder and current manager, tells Essential how everything begins in 1886, with Jacinto Figueira de Sousa, the first bookseller of Madeira, who opens Livraria Esperança in a house in Travessa do Nascimento at age 26. It was a pioneering establishment which sold exclusively books whereas other spaces would also sell other types of products. Together with this business, Jacinto acquired a print shop, with the same name, in Travessa do Forno.
After the founder passed away in 1932, Livraria Esperança is maintained by his son José Figueira de Sousa, and changes site to Rua dos Ferreiros, where it still stands nowadays. Having been housed in a building in Rua da Alfândega for some years, Esperança returns to Rua dos Ferreiros in 1938.
It is with the third generation, under the management of Jorge Figueira de Sousa and his wife Maria Lurdes that Esperança moves to No. 119, still in Rua dos Ferreiros, the so-called office. Back then, with 12 thousand books, it was the third biggest bookshop in the country in terms of sheer offer.
In 1991, so as to preserve the family’s legacy, a foundation is established under the name of Fundação Livraria Esperança. Instituição Particular de Solidariedade Social. Half of all profits are invested in distributing books to the children of the Madeira Archipelago and promoting reading habits.
Five years later, an old 17th century palace opposite its facilities in Rua dos Ferreiros No. 154-162 is acquired and has housed the bookshop ever since. Considered a branch, the space displayed 40 thousand books with their covers facing up. It becomes the biggest bookshop in the country with over twice the volumes the runner-up for the title was selling.
Nowadays the bookstore employs a team of 10 people and attempts to work with the majority of national editors. ‘We always do what0s possible to satisfy our customers’ requests. Sometimes editors ask us if we have some book that they published and it turns out we do’, Cátia assures.
After renovation and extension works, Esperança currently comprises 1,200 m2 and over 107 thousand different books, from 70 different genres, all displayed with their cover facing up and distributed through 22 rooms and three floors. In spite of modifications, the original architecture has been preserved. This is exemplified by the ceiling of the History room, on the 2nd floor, as well as the glass window you find on the stairs that lead to the 3rd floor.
Other trivia shared by Cátia Câmara include the fact that ‘while English troops occupied Madeira in 1801/1802, this was the mess hall for the officials and the metal gates that we nowadays have in the main entrance were found in a wasteland behind the building. They had been the doors of the old artillery battalion in the Jesuits’ College’.

There is no shortage of reasons to visit the biggest Bookshop in Europe where books are displayed with their covers including its historic and architectural heritage but also the many literary gems it houses, like the ‘History of the Discovery of the Islands’ written in Portuguese in Madeira in 1926 by the Azorian Jácome Correia.