The History Tellers project has a new route, a dramatized tour that goes through the history of the Madeira archipelago 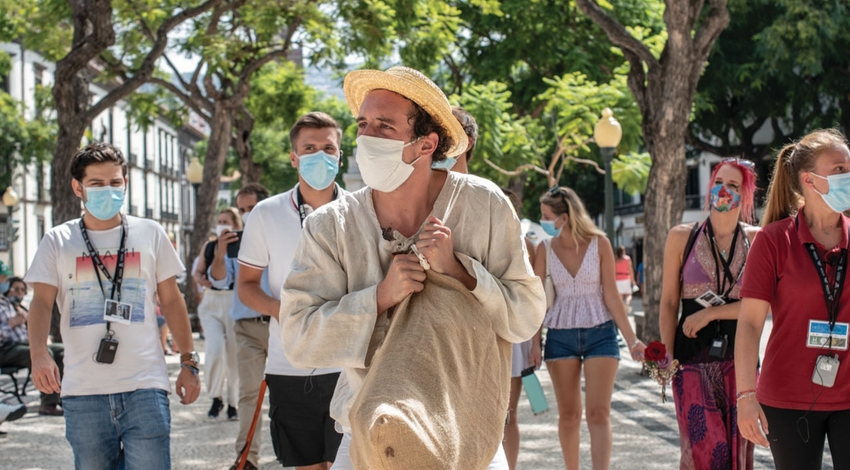 If, for any reason, you have to pass by Praça Cristóvão Colombo, in Funchal, and you see a sword fight between two characters from another time, don't be alarmed. There is a high probability that you are witnessing one of the scenes of the new route of guided tours of the History Tellers project.

In this new itinerary, accompanied by a guide, the group of visitors is invited to tour the main streets of Funchal. The novelty is that at some points, there are actors who travel back in time to play characters from other times.

Known to the general public, the History Tellers project, by the Students' Union of the University of Madeira has existed since February 2015, but this year it gained a new variant, with the option of the dramatized tour.

In this two-hour tour, Carlos Diogo Pereira, one of those responsible for developing the project, says that, as in other itineraries of the Students' Union, participants still have access to explanations of the heritage, history, and culture of Madeira and trivia about the archipelago, but now have the opportunity to live history.

The dramatization of the historical scenes is left to the actors of Associação Teatro Bolo do Caco. "Of course, the scenes are invented, because there is no one alive who has experienced them, but this tour allows children and tourists, with little knowledge of Madeira's history, to have a more concrete awareness of what it is we are talking about", explains Carlos Diogo Pereira.

Each stopping place on the route has a set scene. At the Jesuits' College, the place where the tour starts, there is a Jesuit priest who talks about the origin of the order, the construction of the college and the importance of teaching. In Travessa do Forno, next to Fábrica Santo António, a mother and her servant present the molasses cake, a typical delicacy of Madeira, made from sugarcane syrup, which came about in the late the 15th century by the hands of the Franciscan nuns of the Santa Clara convent.

There are also characters that accompany part of the tour, such as the fortifier and Master of Royal Works Mateus Fernandes, one of those responsible for planning Funchal's defences in the late 16th century. In this case, the actor in charge of this role guides visitors along the paths of the old fortress of Santo António da Alfândega, rehabilitated in 1980 to house the Legislative Assembly of Madeira, and the fortress-palace of São Lourenço.

During the tour, from wardrobe to accessories, nothing is left to chance. The costumes are the responsibility of the Associação Teatro Bolo do Caco and were inspired by photographs and postcards from past centuries.

"In the case of the actor who plays Mateus Fernandes, for example, he shows maps of Funchal with the organisation of the walls based on documents from the time, and so people can identify some of the structures. In the battle scene, they use genuine swords, made of metal," explains Carlos Diogo Pereira.

The dramatizations end up capturing the gaze not just of the group on tour, but also of passers-by. "A nun screaming in the street. A servant girl running. A fight scene worthy of Hollywood. In this aspect, the project ends up promoting itself", says Students' Union representative.

Starting and ending at the Jesuits' College, the History Tellers dramatized tour also passes by Funchal's Cathedral, the statue of the discoverer of Madeira, João Gonçalves Zarco, Blandy's Madeira wine lodge and the Photography Museum of Madeira - Atelier Vicente's.