Dishes, products, culinary secrets… Confraria Gastronómica da Madeira is dedicated to researching the eating habits we had in days past 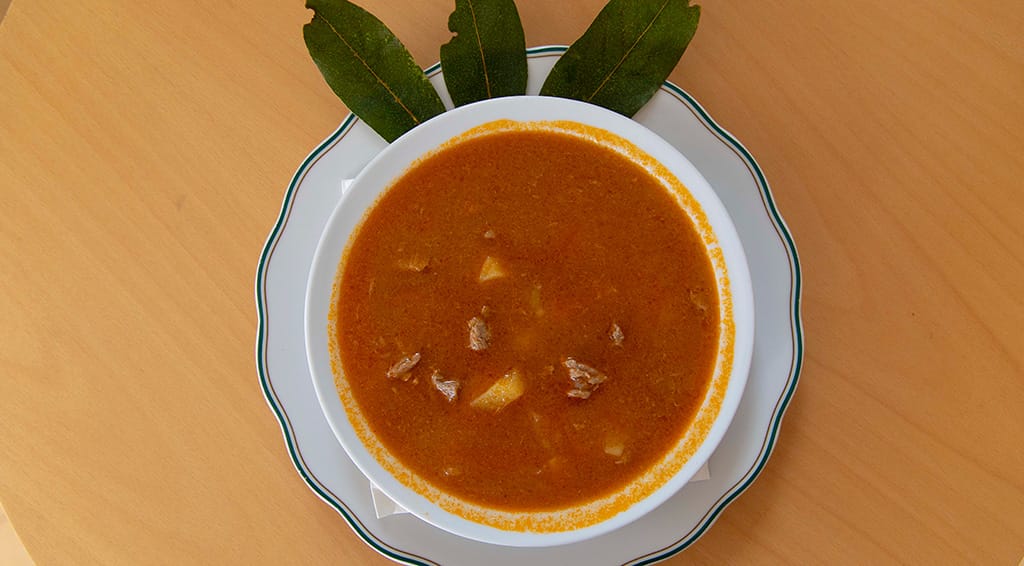 Nowadays, the names Carne da Noite, Carne Santa, Carne Frescal or Caldo da Romaria are not known to many, and fewer still, will have tasted the recipes for which they stand. One seldom finds these dishes in restaurant menus, and even in Madeiran households these traditions have come to be lost with time.

Researching and collecting the recipes and secrets of this gastronomic heritage, including wine, is one of the goals of Confraria Gastronómia da Madeira, the gastronomic guild which has been developing this work since the year 2000. Their president, Alcides Nóbrega, confirms that it is rare to find people and places that still cook these ancient recipes, because many ‘aren’t accessible for people to include in their day-to-day menus’.

Dried goat, for example, is a traditional recipe from the west of Madeira, especially Calheta. It is a dish which demands time for preparation, because it is necessary to salt the goat meat, and leave it to absorb the flavour for at least three days, only then hanging it near a chimney for another 5 days, so it can dry.

The times are different, and time itself is in shortage when it comes to preparing such detailed dishes. But there are other recipes that are still practices and can be found in some restaurants.

Such is the case of the traditional Caldo da Romaria – literally meaning pilgrimage stock – in São Vicente. It is a meat stock with potatoes, carrots and onions prepared by pilgrims coming to São Vicente, after many hours, sometimes days, of walking. The ingredients used to be carried by pilgrims and the stock would be prepared when they paused their walk. It is a simple dish, ‘with lots of sustenance’, says Alcides Nóbrega.

Carne Frescal, from Santa Cruz, is a recipe made from pork and three types of wine: Madeira wine, white wine and red wine. It is also seasoned with peppers, salt and summer savoury. In olden days, after cooking, this meat would be preserved in clay pot for two months and covered in lard. To be served it would be taken out of the pot and fried in a pan.

Carne da Noite is another tradition, ‘much like the modern carne vinha d’alhos’. Typical in Santana, it is made with pork, seasoned with local wine summer savoury, garlic, pepper, bay leaf and salt. It has been included in the menus of some restaurants in São Jorge, like Casa de Palha.

Porto Moniz’s Carne Santa which mixes pork with beef, has not yet been filly reintroduced because many of these dishes require previous bookings of they are to be presented at restaurants.

Alcides Nóbrega stresses that the goal of Confraria Gastronómica da Madeira is to work so that the island’s gastronomic traditions can be brought back into restaurants. It is about ‘reintroducing the typical dishes of each town’ in the local menus, which is a practical challenge. This work includes collecting ‘some recipe collection that is lost in Madeira and in Porto Santo’.

Every month, the members of the guild will go to a place to make people aware of the recipes and teach them how to cook the dishes, so they can then include them in their menus and ‘trigger a demand, and each town can then start affirming themselves’. ‘We’re tourism region, and when the tourist comes, he wants to eat what is typical of each locale he passes by’, mentions Alcides Nóbrega.

This work has already borne fruits, but it is a slow process. Though some of these recipes have already started to make an appearance next to the more popular dishes that are part of Madeiran gastronomy, like the espetada, fired corn, black swordfish filet, tuna steaks, bolo-do-caco bread and molasses cake. But Alcides Sousa emphasises there is a need for more variety. ‘We can’t be limited to swordfish, espetada and molasses cake because there are many more great quality typical products to be enjoyed here on the island’.

Quality gastronomy requires quality products. Alcides Nóbrega highlights the high level of Madeiran products. ‘Any chef who comes to Madeira is amazed with our products in terms of quality and freshness’, he mentions. The goal is to make the most out of that.

The guild’s role is to challenge restaurant cooks to reproduce the dishes, assisting them where necessary, even supplying the actual ingredients. For the chickpea, a vegetable very common in Porto Santo, it was the guild who supplied most of the foundational recipe. ‘There were no seeds to replant it so we had to bring it from another part of the country and reintroduce it in Porto Santo’. The challenge to employ the chickpea was taken on by Chef Manuel Santos, of the Vila Baleira, and by the Panorama restaurant.

Alcides Nóbrega explains that every year, on the guild’s anniversary in late April, they hold a four-day celebration. ‘Many guilds come from Portugal and Europe to visit us then and get to know the reality of what we have here product wise’. The menu for the whole four days is varied.

However, there is one dish they cannot afford not to serve owing to the immense demand that there is for it – the panelo. This meal is cooked in Chão da Ribeira and resembles the Portuguese stew but though it is prepared differently: pots are spilt over the table and guests eat directly off it. ‘It is something that attracts immense people’.

Though there are guilds in Portugal that dedicated themselves exclusively to wine, the Madeiran guild opted to focus on gastronomy and include wines since they are betting more and more on quality and diversity.

The goal of a guild is to learn and share the typical gastronomy of the world and thereby share thereby promote the culture of that area.

Alcides Nóbrega ends on a note that highlights how important it is to preserve our gastronomy throughout the island, never foregoing the quality of the products that are being shared since the whole establishment has the responsibility and obligation of representing the product in its true untainted essence.