Winston Churchill painted the fishing bay of Câmara de Lobos in a day etched into the history of a town now seeking to capitalize on it. 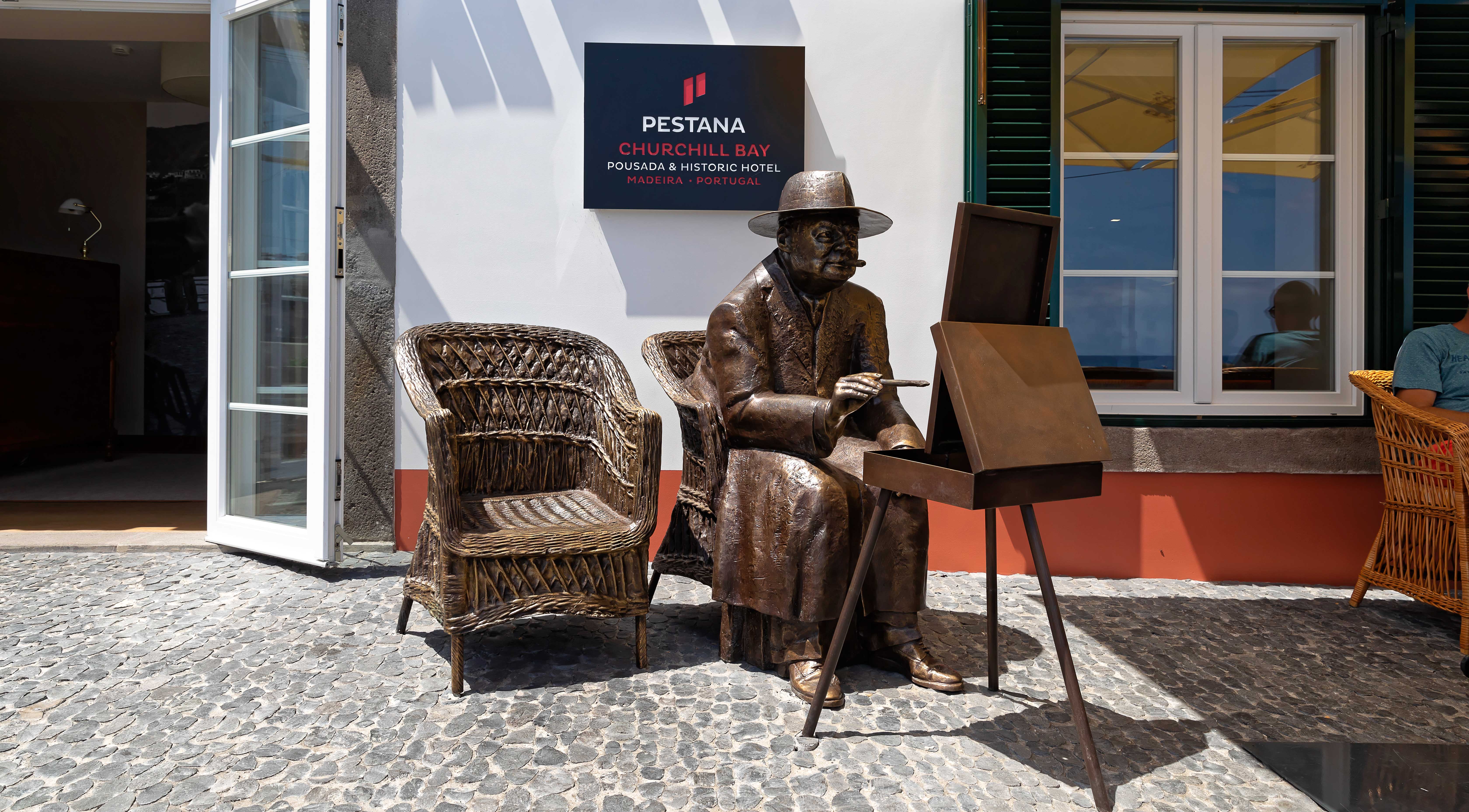 A statue by a door shows how much one man’s visit can mean to a place. This is a statue of Winston Churchill, the British statesman who visited Madeira in the first days of 1950 to promote the reopening of the Reid’s Palace Hotel after WWII.

The former British PM devoted himself to one of his favourite hobbies on January 8th: painting. He set up his easel and canvas and painted the bay of Câmara de Lobos in oil. The place he drew his inspiration from became known as Miradouro Winston Churchill and the presence of ‘the man who won the war’ became a mainstay in the tales told to travellers.

This tie is reinvigorated with the opening of a new hotel, the Pestana Churchill Bay, inspired by the British politician and, most of all, by his visit to Câmara de Lobos. And his presence could hardly be clearer: from the sculpture by the entrance, to the paintings on the walls of some of the 57 rooms.

The hotel, Madeira’s first from the Pousadas de Portugal luxury chain, was built on the site of the old fish market and town hall, precisely in the corner of the bay set to oil by Churchill’s brushes.

Manager Célia Marques guides Essential through the two buildings, ‘one with a more classic décor, and the other more contemporary’. The visit takes us to the terrace, where the restaurant, the bar/lounge and the pool all benefit from a unique panoramic view over the small vessels docked in the bay. ‘We’re sure that this type of unit and locale are a trend. We know tourism seeks smaller units, definitely not mass ones’, Célia Marques explains.

The relaunch of the tie between Câmara de lobos and Winston Churchill also represents an investment in tourism. Every day, the town receives hundreds of visitors who enjoy being lost in the streets and over the scent of the sea. But due to lack of accommodation, these tourists had to leave at the end of the day.

The small town, framed by a handsome bay, is very much a challenge to the senses, and not merely because of the restaurants that blend signature cuisine with the traditional flavours of Madeira, like swordfish, which is fished mainly in this port.

Here one can also learn about the history of poncha, the traditional beverage of Madeira, which, legend has it, was at first exclusive to the realm of Câmara de Lobos fishermen. The Agrela Bar, for instance, is an ideal place to savour the taste of this much touted drink.

What was once a grocery store – and the example is repeated a bit by surrounding establishments – is now a bar where poncha is sold by an owner who crafts it with care and dedication. Served in an ice-cold glass so as to preserve its essence and freshness, it is paired with a traditional snack, the Catfish, known to locals as the ‘codfish of Câmara de Lobos’. 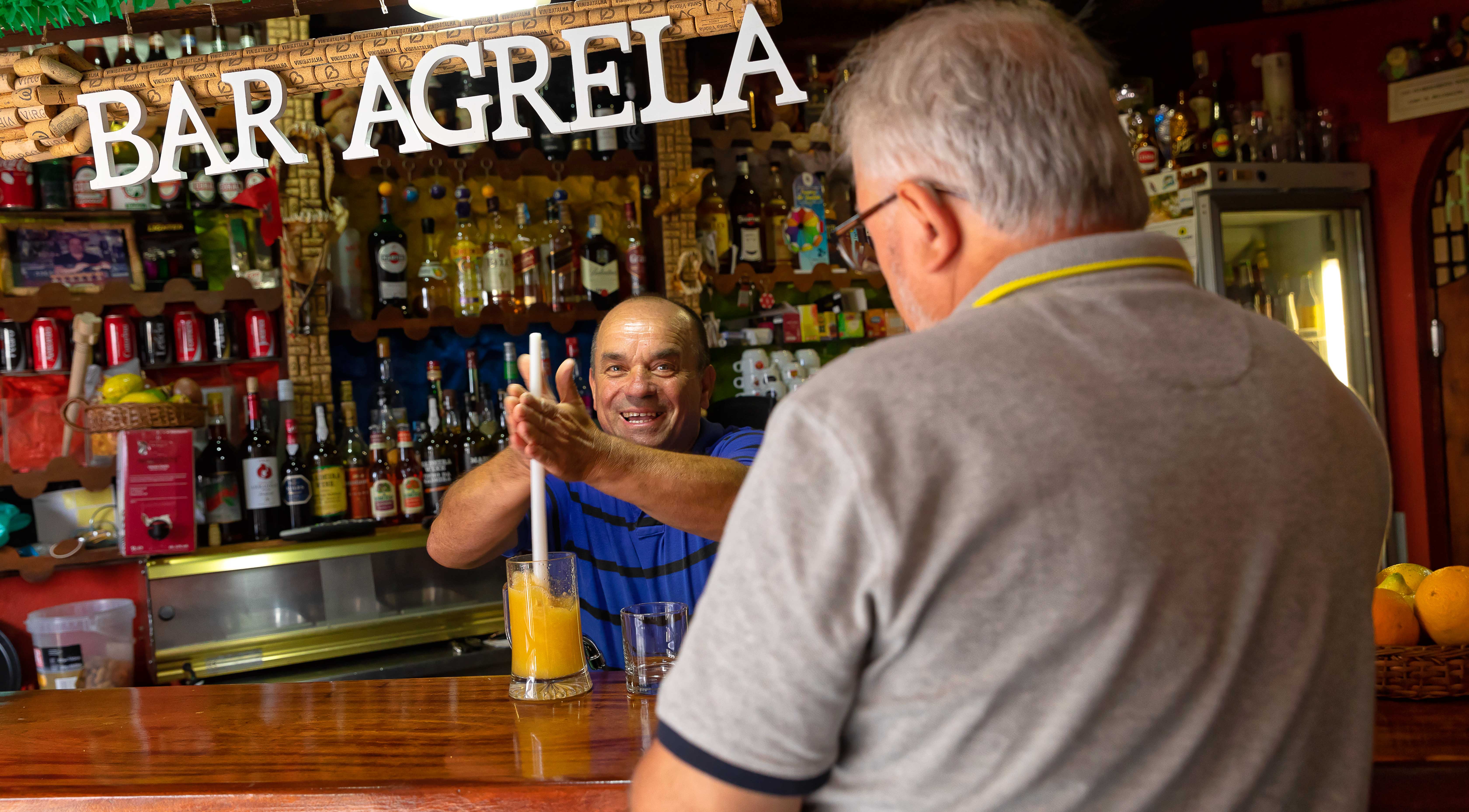 But other drinks have been created in this town, like the Nikita, created in 1985 by the owner of the Farol Verde pub – today Casa do Farol. Saúl Basílio, one of the bar’s employees explains that Farol Verde ‘sold ice cream and it was based on several experiments that the drink was born’, made with homemade pineapple ice cream, beer and white wine, served with or without ice. And because the beverage came to be back when Elton John sang Nikita around the World, the name stayed.

Matters of palate aside, Câmara de Lobos also remains one of the oldest places in Madeira – founded in the 1420s in lands which belonged to João Gonçalves Zarco, one of the Portuguese sailors who discovered the island.

The sailor’s arms can be found adorning the façade of the mother church, consecrated to São Sebastião, which, alongside the chapel of Nossa Senhora da Conceição, the town’s oldest, is a definite must-see.

These buildings have nothing to do with the contemporary style public library building. The basement of this building is now the Press Museum of Madeira, telling the story of the publications of the island. Gathered there are 48 printing machines and lithographs, among them, the gigantic 19th century newspaper press.

The touristic vocation of Câmara de Lobos is something recent. This used to be a poor area inhabited by sea farers and what few visitors came to take in the beauty of the landscape, never staying long.

The owner of Barbearia Eva, Juvenal Fernandes, at age 79, remains a witness of days past. Always with a welcoming smile on his face, this barber tells of how ‘the bay underwent big changes’ ever since he was a child. Once filled with grocery stores and small taverns, the town is now occupied ‘by bars and restaurants’, all geared toward a common purpose: ‘selling seafood, poncha and Nikita’.

Granted, the city changes, but some traditions remain and ‘the street continues bustling’, drawing over people. Even though business is no longer what it used to be ‘there continues to be the occasional customer and many a tourist complimenting the space’, jammed with antique objects and furniture. Being over 100 years old, Barbearia Eva is one of Madeira’s oldest barbershops.

Juvenal Fernandes shares the space with two parrots. One of them, shy all throughout our talk, ended up singing an audible and heartfelt ‘Olá!’. Certainly not a foreseeable goodbye!