Volcanic in origin, the natural pools of Madeira and Porto Santo are the ideal choice for those seeking to delight in the sea with safety. 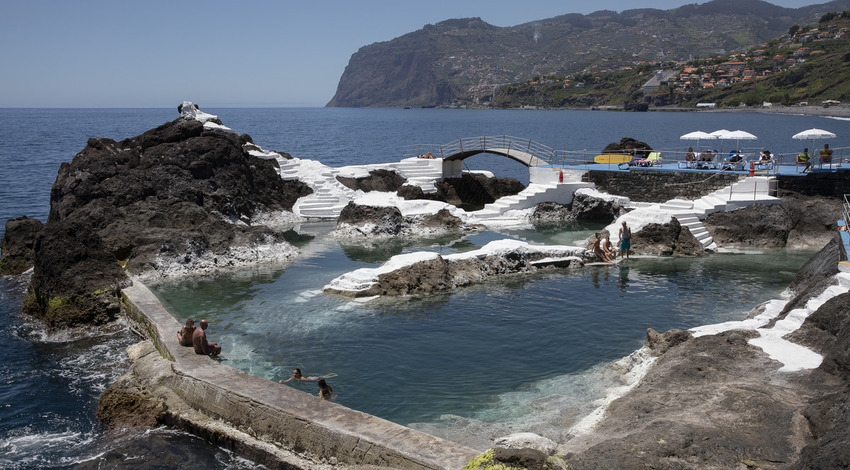 Whatever the season of the year, the temperature of the seawater around the Madeira archipelago inevitably ends up teasing people into going for a swim. On the south coast, the arrival of summer blesses beachgoers with temperatures around 22º degrees in June and 23º degrees in July. But out of the many ways one has refresh one's body on the island, there is one method of experiencing the ocean that is unique: going for a swim in a natural pool.

These can be found a bit of everywhere around the island. They vary in size and shape but share in common the fact that they were all sculpted by Nature, from basalt and with a bit of help from erosion and the sea.

In Funchal, the Madeiran capital, a walk down the Lido promenade takes us to the Poças do Gomes bathing complex, known by locals as Doca do Cavacas. The way these volcanic rocks were set, with a touch of Man's intervening hand originated a small bathing complex overlooking Praia Formosa and allowing access to the Cabo Girão promontory.

The charm of Doca do Cavacas lies in its size. Between the stone bridges resembling tree branches spreading over into the natural salt water pool, the space may look small, but the family atmosphere ends up being one of the main draws of this site.

There is a charge to access the beach, but enjoying the waves and the company of small fish that invade the pool is priceless. During summertime, the beach is accessible between 10 a.m. and 8 p.m.

But talking about natural saltwater pools in Madeira is synonymous with mentioning Porto Moniz. These pools are famous beyond borders and serve as the most powerful ad for this small town on the northwest of the island.

The lava plumes, together with erosion during the periods when the volcano lay dormant formed the mountain range of Madeira. In the most recent period of volcanic activity, lava flowed down the valleys and, to the joy of beachgoers, a part ended up in the sea, where Porto Moniz lies. After cooling down and solidifying, the volcanic rock originated the rocks that comprise the edges of the pool.

The network of pools in Porto Moniz comprises a part that has suffered the touch of man, but such are the standards that must be met for the safety of those who bathe in those waters. Stronger gales may agitate the waves but the safeguards make it possible for one to enjoy the pool with serenity nonetheless. Swimming in these pools, human intervention is hardly discernible and definitely backgrounded. There, the atmosphere is also family-friendly, with there even being small swimming pools that are appropriate for children. The space can be accessed between 9 a.m. and 7 p.m. for a fee.

Those looking for a space they can access free of charge have the choice of going to the Cachalote natural pools, only a few metres from the town's more famous pools, which are also a very good swimming spot. The sunbathing area is relatively wide and the experience of enjoying the singularity of a natural pool is in no way inferior to the experience of visiting the neighbouring pool. Average yearly water temperature usually sits between 20º and 21º degrees.

In the neighbouring parish of Porto Moniz, the natural beauty of Seixal leaves no one indifferent. The shades of green from the mountain extend down and contrast with the blue of the ocean. From the sea, the magnificence of the rock is well worth one's attention and respect. Known for its remarkably sized black sand beach, Seixal also has two other relatively noticeable natural treasures.

The volcanic origin pools of Clube Naval do Seixal are a valid quiet alternative to the neighbouring beach. One can leave on an adventure and rent a kayak and diving equipment to explore the ocean up ahead. Though access is free of charge, the place is only open between 10 a.m. and 7 p.m.

Safety, the quality of the water, the depth and the beauty of a natural pool are strong reasons for choosing one's diving swimming spot. On the other end of Seixal, in Poças das Lesmas, the setting is idyllic. On one end of the beach, there is an arch that serves as an entry to the clear water surrounded by volcanic rock.

The sea comes and goes at its own pace and beachgoers feel like they are in an infinity pool. It might be a good idea to pack one's scuba goggles and uncover the excellence of the rocks and fish that call that water their home. People seeking a calmer, more protected space find a good option in Poças das Lesmas. Access is free of charge.

In the neighbouring island of Porto Santo, there is also a special place where one can enjoy the sea from a natural pool. Porto das Salemas, on the north coast of the island is a small inlet of medium access. The footpath leading there is steep but, after arriving at the beach, the complexity of the journey stays behind, barred from entering a paradise within a paradise.

The ebb tide uncovers a network of natural pools. They vary in size and depth, offering different options to the several members of the family. The sea is usually calm and the water clear, comprising an alternative to the miles-long beach on the south of the island.

When it comes to choosing a place to cool down in the summer, the choice can be a hard one. In Madeira, though, there is no erring. Between crystal-clear water and sceneries that look as though taken straight from a book, the archipelago's natural pools stand out as an excellent solution for those seeking to enjoy the benefits of the sea in a safe environment.